RssInstagramTumblrPinterestYouTubeGoogle+TwitterFacebook
Guess what, folks? Telepathy is now a thing! No, we didn’t discover the supposed “secret worlds” of telepaths; rather researchers at Harvard University and their colleagues in Spain and France have demonstrated the first ever – and, might I add, non-invasive – brain-to-brain communication between humans. This experiment was helped funded by the European Commission under their HIVE project (Hyper Interactivity Viability Experiments). 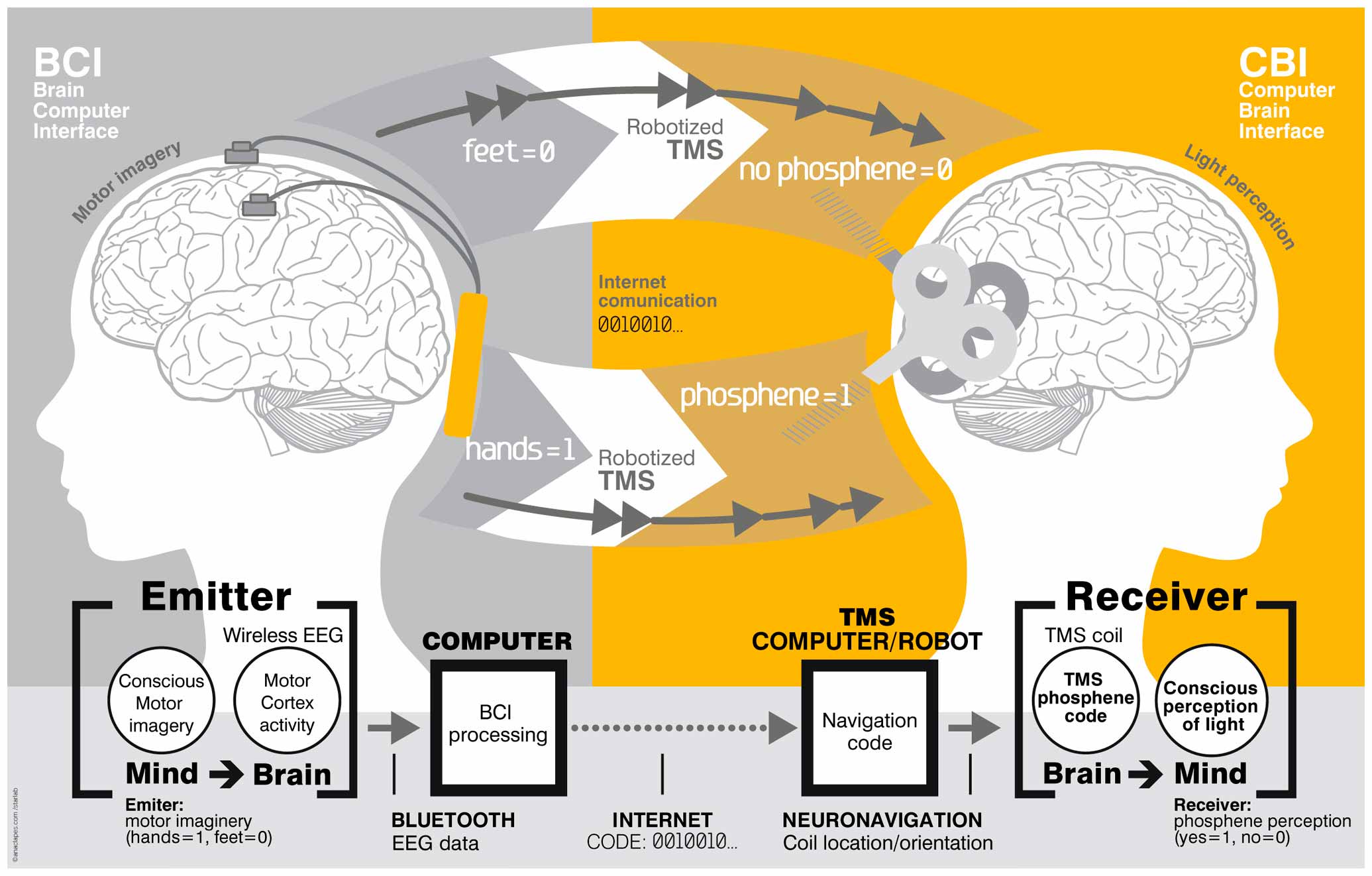 Four human subjects took part in the experiment. One was assigned to the brain-computer interface (BCI), where the messages would originate, and the other three were assigned to the computer-brain interface (CBI), in which they’d receive the messages being transmitted to them. From India to France, nearly 5,000 miles apart, the binary translations of “hola” and “ciao” were mentally transferred with great success.

“Here we demonstrate the conscious transmission of information between human brains through the intact scalp and without intervention of motor or peripheral sensory systems. Pseudo-random binary streams encoding words were transmitted between the minds of emitter and receiver subjects separated by great distances, representing the realization of the first human brain-to-brain interface.” (PLOS, “Conscious Brain-to-Brain Communication in Humans Using Non-Invasive Technologies“)

The words “hola” and “ciao” were transmitted using an electroencephalogram (EEG), which was connected online, and robot-assisted image-guided transcranial magnetic stimulation (TMS) devices. The exchanging of thoughts via interlinked human brains – i.e. telepathy – was achieved after years of research and stepping stone experiments done beforehand, e.g. the controlling of rat tails and robotic limbs via the mind.

Using the EEG, the words were translated into binary and then sent to France to the CBI, in which was then transmitted into the receivers’ brains through non-invasive stimulation, whereby flashes of light appeared as numerical sequences in their peripheral vision and decoded. These are known as phosphenes.

This is only the first of many more experiments ahead under the EU’s HIVE project. Where we go from here is, well, mind boggling.

“In the next 50 years we will witness the coming of age of technologies for fluent brain-computer and computer-mediated brain-to-brain interaction. While recent research has delivered important breakthroughs in brain-to-computer transmission, little has been achieved in the other direction – computer-controlled brain stimulation.” – EU’s HIVE

Telepathy is a very old concept, of which carries its own historical garbage of woo. However, it doesn’t negate the possibilities of being achieved via advance science and technology. As experiments like the one above shows, telepathy is a very real concept which need be aided by our own innovations – the creation of techno-telepathy.

Could you imagine what our world will transform into when our predominant means of communication is via thought? Everything will change fundamentally, from our markets to our governance. Technically we already do this with the internet acting as our medium – emails, texts, PMs, etc. Our thoughts unravel in code and translated into millions of other peoples’ monitors. Our next challenge is achieving a similar feat without the aid of monitors and coded words, but rather by pure thought.