2D Tin Tapped as the Next Supermaterial

2D Tin has been discovered as having potential for besting Silicon in microprocessing capabilities and conducting electricity at maximum efficiency. According to researchers at the U. S. Department of Energy’s SLAC National Accelerator Laboratory and Stanford University, a single layer of tin atoms could be the world’s first material to conduct electricity with 100% efficiency at the temperatures that computer chips operate. These researchers call the 2D material “stanene,” a combination of the Latin stannum (Tin) and the suffix used for graphene, which is also another single-layer material that yields great promise for its electrical properties.

Shoucheng Zhang, the team leader and both a physics professor at Stanford and the Stanford Institute for Materials and Energy Sciences (SIMES), says that Stanene “could increase the speed and lower the power needs of future generations of computer chips, if [their] prediction is confirmed by experiments that are underway in several laboratories around the world.”

Over the past decade, Zhang and his team have been working to calculate and predict the electronic properties of topological insulators, a special class of materials that only conduct electricity along their outer edges and surfaces. “The magic of topological insulators,” says Zhang, “is that by their very nature, they force electrons to move in defined lanes without any speed limit, like the German autobahn…as long as they’re on the freeway–the edges or surfaces–the electrons will travel without resistance.” 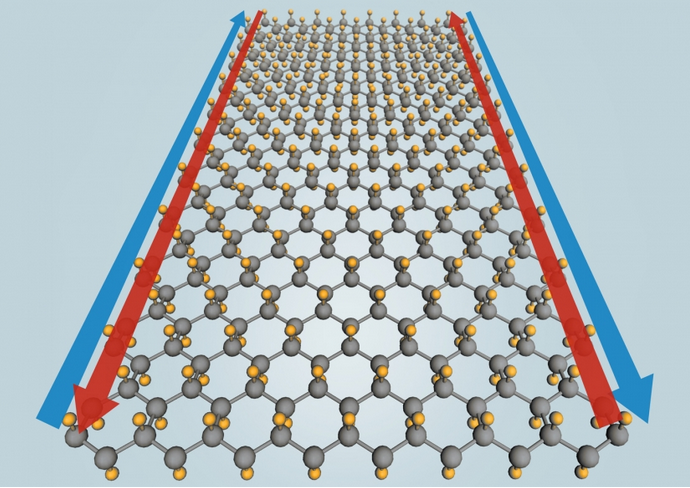 Picture above: Stanene Lattice. Adding Fluorine atoms (yellow) to Tin atoms would allow electricity to be conducted much faster along the edges (blue/red arrows) at temperatures up to 100° Celsius.

Between the years 2006 and 2009, Zhang’s group predicted and proved several elements in the lower-right section of the periodic table to be topological insulators. However, none of these were perfect conductors at room temperature, which prevented use in commercial products. Earlier this year, with the help of visiting scientist Yong Xu, the group started looking to singular layers of pure Tin, and calculated it would insulate at and above room temperature. On top of that, their calculations predicted that adding fluorine atoms would increase the operating range up to 100 degrees Celsius.

[easyazon-image align=”left” asin=”0792368096″ locale=”us” height=”75″ src=”http://ecx.images-amazon.com/images/I/41dyfySxlbL._SL75_.jpg” width=”50″]The first usage for this stanene-fluorine combo, Zhang speculates, could be for wiring microprocessors, allowing electrons to freely flow while reducing power consumption and heat production. The challenge lies in ensuring that only a single tin layer is deposited and is kept intact during the chip making process, which is done at high temperatures.

“Eventually, we can imagine stanene being used for many more circuit structures, including replacing silicon in the heart of transistors,” said Zhang in SLAC’s press release. Silicon is the current dominant element used in chip-making, however tin could be  the next step in making 100% efficient microprocessors and superior chips for commercial products. “Someday,” added Zhang, “we might even call this area Tin Valley rather than Silicon Valley.”