RssInstagramTumblrPinterestYouTubeGoogle+TwitterFacebook
Inspired by the rise of 3D printers, 3D-printed molecules are on their way to your homes and the future.

Dial-a-Molecule is a 5-year-long British project that promotes research towards generating molecules quickly and efficiently. This collective of 450 researchers and 60 companies has been working and fundraising since 2010 and the project runs until 2015 when they will announce their findings.

A successful breakthrough on a molecular-level 3D printer will yield tremendous benefits in agrochemistry, healthcare, molecular electronics, and other emerging fields.

There’s an estimated 1060 moderately sized carbon-based molecules that could possibly exist. So far, humans have only synthesized about a tenth of these.

“I would consider it entirely feasible to build a synthesis machine which could make any one of a billion defined small molecules on demand,” says Richard Whitby, Dial-a-Molecule founder and chemist at the University of Southampton, UK. “The bigger challenge is that computers have a much harder time figuring out whether that reaction will actually work in a synthesis, particularly if the target has never been made before.”

Dial-a-Molecule has published a roadmap that sketches out their long and short term goals. A summary of the document details the three core challenges the project needs to solve in order achieve their goal: creating the Lab of the Future & Synthetic Route Design, creating a Step Change in Molecular Synthesis, and creating Catalytic Paradigms for 100% Efficient Synthesis. “The Robo-Chemist” by Ryan Snook. ryansnook.com
Another molecule company, Chematica, serves as a searchable network of over six million organic compounds. It looks for synthetic pathways leading from a starter chemical, which then connects to any other target compound of your choosing. It also offer up-to-date info many educational databases don’t have.

The team has spent years identifying entries that lack crucial information about reagent compatibility or reaction conditions. Because of this, its recommendations are able to keep efficiency in mind. “In 5 seconds we can screen 2 billion possible synthetic routes,” says Chematica founder Bartosz Grzybowski. 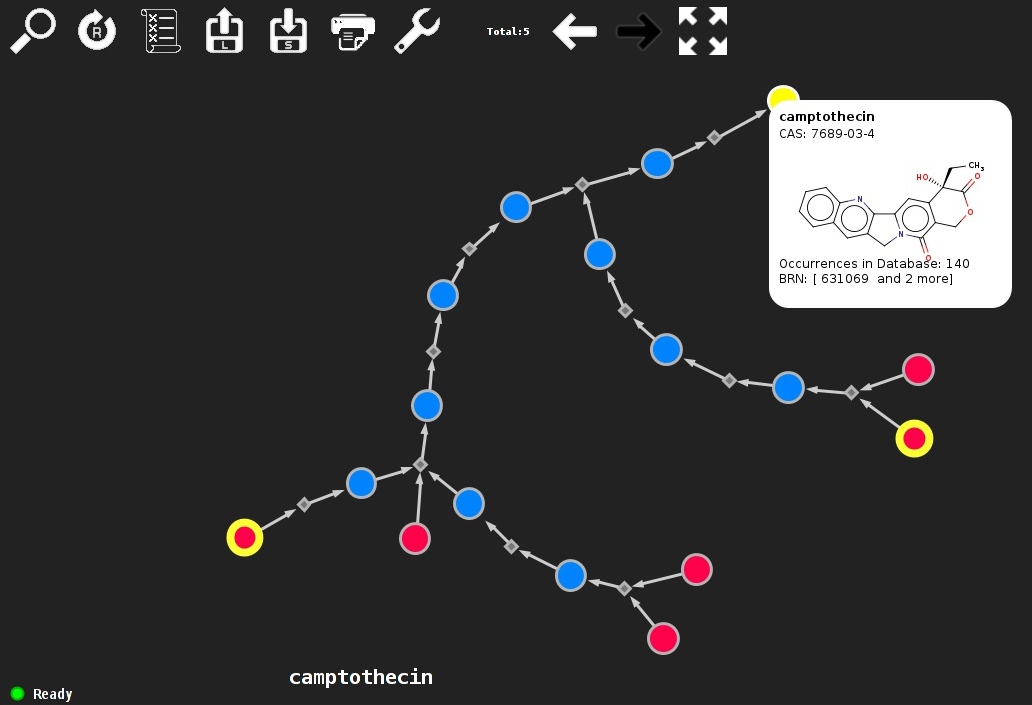 Diagram of a synthetic pathway leading from starter chemical (red dot), through intermediates (blue), to target compound (yellow). Credit: Bartosz Grzybowski
In order for such a molecular 3D printing device to exist, a cultural shift in chemistry is needed by way of sharing information between labs.

“That’s absolutely the biggest barrier,” says Mat Todd, a chemist at University of Sydney. “In chemistry, we don’t have that culture of sharing, and I think it’s got to change.”

To learn more about the potential of 3D-printed molecules, check out University of Glasgow chemistry professor Paul Cronin’s TED talk below:

3D-printed molecules wouldn’t just be limited to cheap and affordable prescriptions. You could make any molecule at will and affordably. Imagine having your own organic synthesis device at home to create medicine, food, drinks or even prescription drugs all at your fingertips! We presently have conventional 3D printers available at home that develop solid objects, and molecular compounds will soon be channeled in the same fashion.

We Endorse the March for Science 2017
January 26, 2017
Subscribe to our Newsletter
LATEST ARTICLES