Here’s a Nest for Your Smart House

The Internet of Things anticipates that every piece of your home will be equipped with Internet connectivity. But who would think to include thermostats, smoke alarms and carbon monoxide monitors on that list?

Yesterday, Google announced that they acquired Nest, a company specializing in home automation.

The impetus for Nest was Fadell’s frustration with the high cost of eco-friendly HVAC systems he was looking to install in his new home. Given his experience as an engineer, Fadell decided to build a system himself.

The “learning” thermostat, Nest’s first product, was designed to adapt to your home heating and cooling habits to reduce energy consumption. The thermostat will shut-off when you’re away, turn on before you come home, and display a green leaf when you have the potential to save energy. 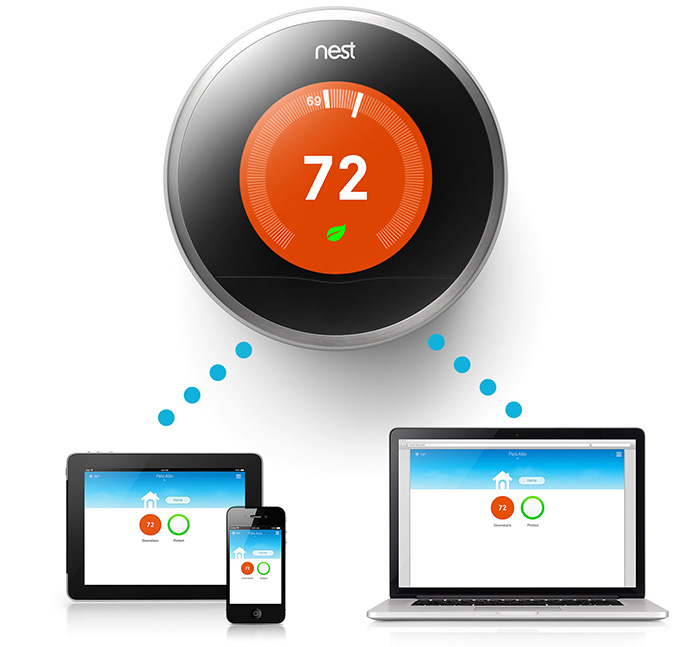 After so many uses, the Nest thermostat builds a personalized heating and cooling schedule. And as always, it can be controlled by your smartphone.

A more recent addition to Nest’s line is the Nest Protect, a combination smoke alarm and carbon monoxide monitor. The revision here was alerting danger with a kinder scheme of cautious lighting and the human voice instead of annoying beeps. The Nest Protect can also be silenced with a wave of your hand if the alarm was just a forgotten egg burning in a pan.

Predicting the future or making a prudent decision for business, Nest did enough to secure billions of dollars from Google. I’m sure we’ll see smarter houses in years because of the acquisition.

The Internet of Things and home automation is already firmly a present situation. But what can we expect from these smart, domestic technologies in the future? Also, how will the success of Nest show us which systems of design work and which do not? If the human voice is a better mechanism to caution people, then where else will we see this technology? German company tado° has even congratulated Google’s acquisition of Nest, and they were quick to point out that it’s inspiration for competition and growth in smart house technology.