This Should Be The New Apple iWatch

Designer Kwan Yoo has created a brilliant futuristic smart watch concept called Watch-ME.  Apple iWatch rumors have been a hot topic in the wearable tech community. Designers and futurists are predicting that the iWatch could include solar-charging technology, a fully flexible plastic OLED screen, or curved Gorilla Glass. A truly innovative iWatch could be the next big thing for Apple. One thing is certain, if Apple does release a smart watch this should be the design. Anything less will be a disappointment.

An Apple iWatch could be the next big thing in wearable technology but the design needs to be dramatic. Apple needs to develop something unexpected and revolutionary. Enough with the small changes Apple. No more incremental dwarfish bevel changes or plastic cases in candy colors. The time has come to blow up the box and go futuristic. Shock us. Make us believe in techno-magic again.

According to Yoo’s Behance page:

“A convenient wearable device could be described as wearable only when the device is physically comfortable when worn, with less motion while in use and easy access to software. Watch-ME will instantly show summarized information on the curved touch display around the wrist. The content will float on the topside of the display no matter what direction its facing,like oil drop floating on the surface of the water. Its simplest design limits many features usually expected from other similar wearable devices,but it allows the following crucial features; instant viewing of incoming SMS and sender;incoming call and caller; and to answer the call by tapping on the icon from any angle.” 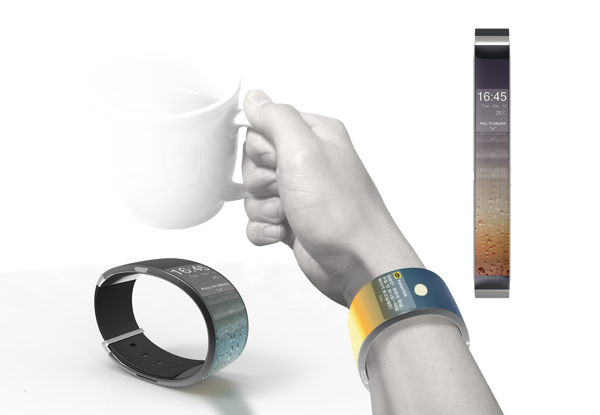