Into the Blue with Contemporary Artist Neil Harbisson

Neil Harbisson is a contemporary painter, musician and filmmaker who has successfully turned his life into a living art form with the cybernetic union. A pioneer in the connection between technology, the human body, and the brain, Serious Wonder recently caught up with Neil to talk to him candidly about his life’s work. He is currently in New York making a film that explores the relationship between color and sound.

Born with a rare condition that made him totally color-blind, Neil’s ability to hear colors and to perceive colors outside the normal range of human vision, such as infrared and ultraviolet has been well documented. His ability is made possible by an antenna-like device called an “eyeborg,” which has been grafted to the back of his head since 2004. The eyeborg uses software, a sensor and a process called bone conduction to turn colors directly in front of his vision into sound, which is based on a correlation of frequencies and wavelengths that are emitted naturally by the color’s hue. This has allowed Neil to become extremely color precise. For example, he can distinguish between 60 shades of blue.

Neil’s journey started out being about color and color blindness, but it’s moving into something even more profound. The antenna has recently been upgraded with Bluetooth, and Neil can now connect directly to other people through the antenna, and feel what other people are seeing. With direct audio input into his skull, Neil will be able to extend his hearing, and also to detect ultrasound and infrasound.

“We tried a phone call the other day. I can receive calls directly to my skull, not only colour. Having Bluetooth means I can connect to any other device that has Bluetooth, like the internet. This really opens up a whole new world of possibilities.”

For Neil, “cyborgism” is the art of creating your own senses and then expressing yourself through these new senses. “I see all of this as art. The antenna is an art work and modifying your senses is an art movement. It‘s treating your own body as the sculpture.” A “cyborg” by his own definition, Neil’s feeling of being united to cybernetics didn’t happen overnight. “It took me 5 months to get used to the antenna and several months for the physical union to take place with the software. There is the union between the software and brain which is an invisible union. Then there’s the physical union with the cybernetic body part and the body. And finally there’s the union with society, which is the most difficult one.”

Neil co-founded the Cyborg Foundation in 2010 with his friend Moon Ribas, to defend the “cyborg rights” of people who want to become technology or feel they are technology. The foundation is also collaborating with universities worldwide to explore the possibilities of cybernetic union, which is still an undeveloped field. “As humans we are constantly evolving. We are at a stage where we can now not only increase our knowledge, but information is available to all of us. We can focus on extending our senses and extending our perception.” 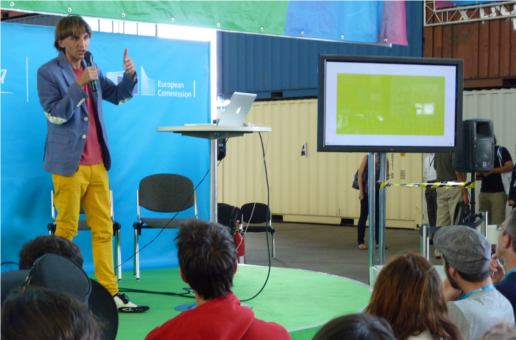 One of the major benefits of extending our sensory perception through cybernetics is to be able to detect danger, such as ultraviolet light that can damage the skin, and potential accidents. Neil explained, “A small infrared sensor at the back of our head would allow us to detect if there was some presence, with a 360 degree perception of our surroundings. This awareness is something we lack, because all of our senses are focused on what we have in front of us. The more we can sense our surroundings the more we can avoid dangerous situations.”

It’s an ability widely found in the animal kingdom. Dolphins, for instance, can perceive through bone conduction and renal sensors. Other animals, like cats, are able to see in the dark. Neil feels that his union with technology has brought him closer to nature and other animals, and it’s this understanding that is at the heart of his message to the world.


“To me it’s very clear that we could all go in this direction, and I think it would be great because there’s some kind of disconnection with nature that I don’t like. If we become technology we are able to sense nature much better, and this disconnection disappears. The problem comes when we disconnect from technology, as something separate from ourselves.”

Many people have legitimate concerns about the ethics of using technology to enhance the body and the brain. For instance, who will have control over the technology? Will there be equal access to it? Will everyone want to walk around with software in their head?

Neil is optimistic that society will eventually come to accept the existence of cybernetic union, as it becomes more common. “Most people fear their own imagination, imagining situations in the future where having technology or being technology would be a danger. The fears we had about technology 20 years ago have more or less gone. Now the fear is about wearing technology. That will eventually go, and then it will be fears of implanting technology and then they will go. It goes in waves. It really is a matter of time.”  Neil’s unique experience of “becoming technology” is an early indication of the big impact cybernetics will have on human society and consciousness itself.

The Future This Week: Interstellar!!!Transmaterial: The Future of Our Built Environment