In January of this year the world was stunned to find out that, during the upcoming FIFA World Cup, a Brazilian paraplegic will be ceremoniously chosen to kick off the event. It wasn’t the fact that this person was paraplegic, but rather s/he will be kicking off using a mind-controlled exoskeleton suit to help. Were we really that close to our sci-fi fantasies that people who were originally disabled could now partake in sports activities using advanced technology?

Two months later, we’re now given an even larger confirmation of this new, wondrous reality: the Cybathlon! In 2016, the National Centre of Competence in Research (NCCR) Robotics will be hosting an event in Switzerland, modeled after the Olympics, in which the athletes are bionic in some way – or better yet, cyborgs. These athletes won’t just be showing off their physical prowess, but also their technological might by using high-tech prosthetics, cybernetic devices, and mind-controlled software. The world will witness the first ever “Transhumanist Olympics,” as predicted by author and philosopher Zoltan Istvan.
Hank Pellissier, who is the Managing Director of Brighter Brains Institute, wishes to go a step further, completely replacing human athletes, enhanced or not, for robots instead.

“We can’t protect the cognitive organ of the meat-bags who are presently performing for us with sacrificial results, so, let’s yank them off the field and substitute their frailness with metallic, omnipotent wonder-athletes.

Teams of Robots, shaped like human gridiron heroes, wearing the same colors, performing the same plays, blocking, tacking, pass-catching, running, punting, intercepting… let’s create robots that can do everything the Pro Bowlers can do, without mental incapacitation as a consequence.” 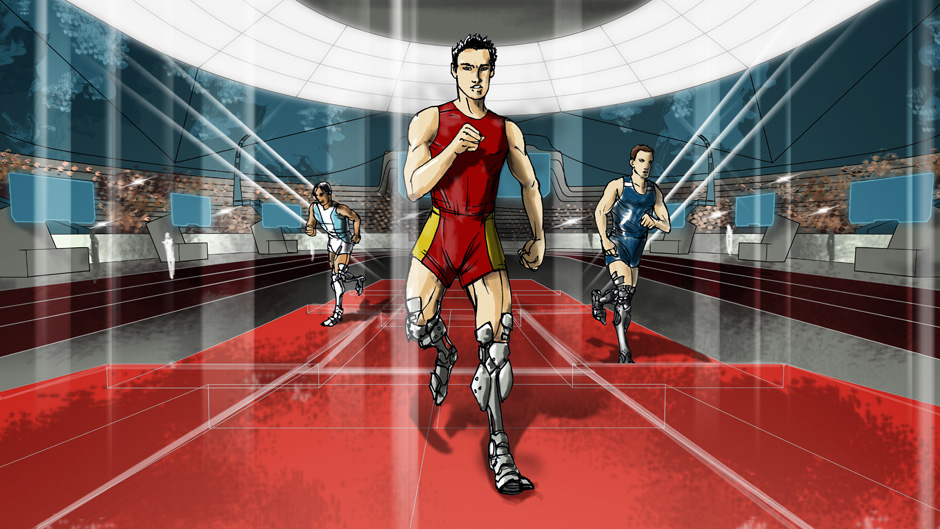 And transhuman athletes they will be! Where in normal Olympic events, those with prosthetics are only allowed to reach the physical ability on par with their non-bionic competition, those competing in the Cybathlon are given no restrictions. They are to use the best that money can buy and great minds can engineer, truly testing themselves beyond what any normal human being could accomplish.

The disciplines covered in this event include the powered arm prosthetics race, the brain-computer interface race, and the powered exoskeleton race.

Originally, if any athlete were to attempt to use technology or performance-enhancing drugs to make themselves better than their competitors, they were practically shunned from the sporting culture. In the Cybathlon, however, these athletes will no longer be looked down on as “cheaters” or as mere “parathletes,” but as the Olympic Gods in which the event always metaphorically based their athletes on. To go further than any normal athlete could muster, resulting in what will most assuredly become even more advanced as events like the Cybathlon continue taking place in each passing year.
John Niman, who is a J.D. Candidate at the William S. Boyd School of Law at the University of Nevada, had made similar predictions regarding the technological impact of sports, stating:

“In the future – and I don’t mean the far-future; I mean 5, maybe 10, years at most – what we’re going to see is technology making the people who use it, disabled or not, more capable than otherwise fully functional, biological human beings. It’s the “normal people,” or the “able-bodied people,” or whatever you want to call them, who are going to be at a severe disadvantage. This prosthetic technology is going to quickly outpace human biological limits.”

The world is quickly changing as it continues developing technologically at an exponential pace. Sports is nothing more than a byproduct of society as it currently is. Cyborgs competing in sporting events is now our reality. What we should be questioning now is, what’s next and where can we purchase tickets?

LANGUAGE IS A MUSICAL ALGORITHMRethinking the Future of the Toilet