J147 is a promising potential therapeutic for ALS. Help us do the lab work necessary to move this drug one step closer for ALS patients.

This is Eric Valor. He is one of 30,000+ people in the US currently trying to survive ALS (Amyotrophic Lateral Sclerosis or “Lou Gehrig’s Disease”). Since his diagnosis, ALS has taken a very heavy toll on him and his family; a toll that is personal, financial, and emotional. Even though Eric gradually became quadriplegic, losing all personal independence, and is now being kept alive only through the use of a mechanical ventilator, his mind has stayed sharp.

Instead of giving up, Eric decided to fight ALS. Though he is past his last natural breath, he took control of his situation. 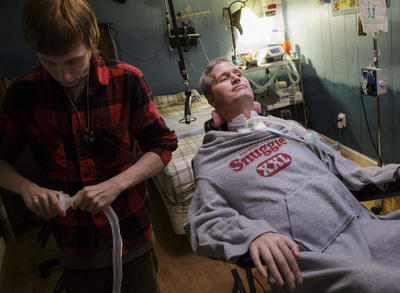 Eric and the SRG team created this crowdfunding campaign to fund the histopathology (microscopic tissue examination) lab work needed to better analyze the results of our already-ongoing study at the Salk Institute. Through this work, which will be published in a public Open-Access journal, SRG can bring J147 closer to the clinic for ALS patients.
Through the use of a computer system which tracks the movement of his right eye (very similar to the technology used by another well known ALS patient – Stephen Hawking), he used the Internet to train himself in neuroscience then built a coalition of fellow patient activists and biotech entrepreneurs. Along with partners Ryan Bethencourt, Andrew Gengos, and Joseph Jackson, Eric founded SciOpen Research Group. SRG is a non-profit biotech with the sole purpose of developing J147 and other therapeutics for ALS, an orphan disease which has historically been neglected.
Because ALS frequently hits in the prime of life, it creates a severe economic drag in terms of lost productivity. This extends beyond the patient to the family, bankrupting savings and destroying careers as they try to care for their loved one.

SciOpen Research Group needs your help! Our experiment is already underway. We will generate good data for sure. But to generate GREAT data, we need to do microscopic tissue examination. Help us bring this project home. Together we can change the research landscape and provide hope for those afflicted with ALS.

Imagining Our Future InfrastructureA Future Under the Water: Suspended Flow