RssInstagramTumblrPinterestYouTubeGoogle+TwitterFacebook
Debates and discussions are now underway in Washington, D.C. regarding the ethics and future ramifications of human gene editing. Ever since Chinese scientists dropped a bombshell revelation that they’ve been genetically modifying non-viable human embryos to test the precision of current gene editing techniques, scientists around the world have come to realize that the future of human gene editing is finally here. Their opinion on the matter: they’re scared shitless! 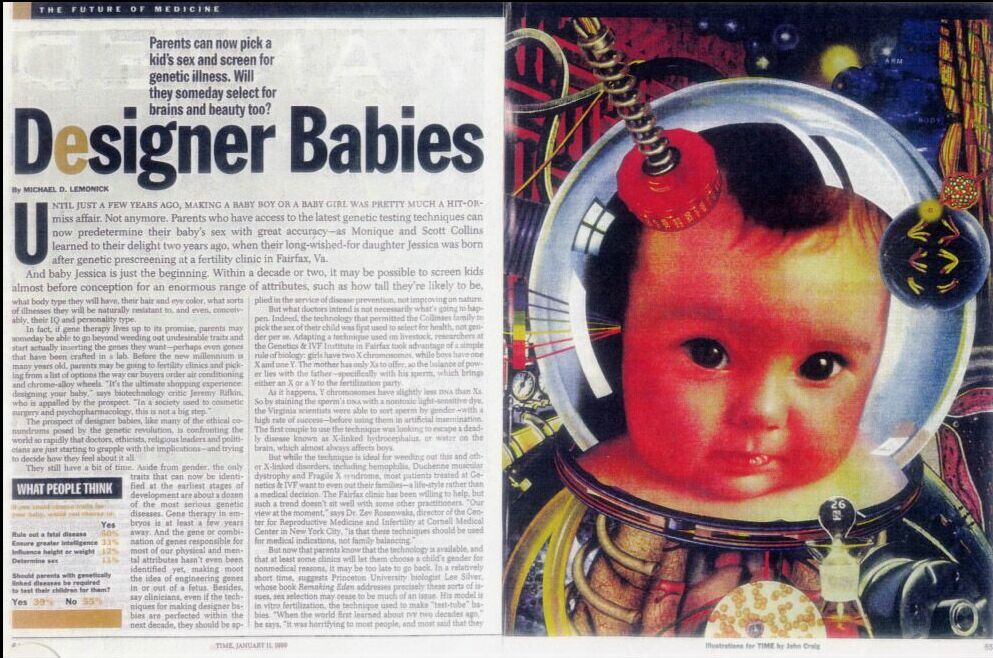 U.K.’s Royal Society. Here deliberations will be made regarding the ethical ramifications of future human gene editing and whether or not it should be outlawed.

Most notably, the discussion regarding gene editing will largely revolve around the future prospect of what are known as “Designer Babies” – children being genetically modified before birth at the whim of their parents for both medical and non-medical applications.

“[W]orries about the technology’s darker side have mounted ever since Chinese researchers in April reported results of an experiment to edit a defective gene in a human embryo. For ethical reasons, researchers say they used an abnormal embryo… [S]ome scientists and bioethicists worry that gene editing may be used one day to create “designer babies” and forever alter the human genome.” (via U.S. News)

Although it shouldn’t come as a surprise, the White House’s very own neo-Malthusian luddite John Holdren is attending the summit as well. As the summit began, Holdren made his stance known by opposing any use of gene editing to help genetically modify humans to combat diseases, stating that it’s “a line that should not be crossed at this time.” But then, as I’m sure other scientists will point out during the summit meeting, the debate surrounding the question of whether or not we should allow the use of human gene editing will largely become irrelevant as gene editing tools continue dropping in price and become open-sourced.

Which then raises the question: why are we even having this debate in the first place!? Shouldn’t any debate regarding gene editing instead revolve around the question of how we can make gene editing as safe as possible and not reach into the hands of those with nefarious motives? Gene editing tools are becoming cheaper by the day. As a matter of fact, just a few weeks ago, molecular biophysicist Josiah Zayner made history when he started a crowdfunding campaign on Indiegogo, promising DIY CRISPR Kits that’ll cost less than $200. CRISPR/Cas9 is one of the world’s most efficient gene editing tool to date and is now being open-sourced for the world to take advantage of.

A year ago, Serious Wonder spoke with the author Jamie Metzl, who was also the Director for Multilateral and Humanitarian Affairs for the National Security Council under the Clinton Administration and subsequently Senior Advisor to the Undersecretary for Public Diplomacy & Public Affairs and Information Technology. There we not only discussed his book Genesis Code: A Thriller of the Near Future, but also the future implications of gene editing and Designer Babies.

“The future is not only fast approaching, it is already here. If we froze science today and had no more revolutionary advances, only continued evolution of technologies that already exist, we would be able to significantly enhance our species in only a matter of years. Our genetic code touches the essence of what it means to be a human being, but as the science for manipulating it advances exponentially our dialogue about this technology, what it means, and how to manage it has hardly begun.”

Metzl made a good point as to why this conversation is happening in the first place. Genetics plays a crucial role in all of our lives. And so when it’s being enhanced or augmented using advanced technology, this puts a lot of people in a very uncomfortable position. As a result, a lot of irrational fears tend to cascade throughout society. The best example of this was the Ebola hysteria that swept the entire United States, despite there being no real threat to those living in a developed nation such as it. In response to this, Metzl made it abundantly clear that, “If we don’t start discussing genetic engineering in a meaningful way now, the dialogue will be hijacked by this kind of irrational hysteria in the future.”

Lastly, if we’re to have a serious discussion about the future of gene editing and Designer Babies, then we also need to include space exploration as well. If we truly wish for our species to become space explorers, then the legalization of Designer Babies is the only route one should take regarding these debates. Due to our current biological limitations, traveling out into deep space for long periods of time just isn’t possible without negative side effects to our overall health and physiology.

When you then consider the extreme likelihood that people will also be having sex in space during these long voyages, gene editing becomes an even more abundantly clear solution. Without gene editing, children born in deep space will be subjected to both radiation and micro-gravity conditions, of which would eventually kill them. Where is the ethical and moral concern for these children here?

You want to talk about ethics? Then we must recognize the ethical responsibility to ensure that future children born in deep space are genetically prepared to accommodate those conditions. No human, either adult or child, will be able to explore deep space until we end this pseudo-moralistic, neo-luddite crusade against future gene editing and Designer Babies. The sooner we come to accept this, the sooner we’ll realize just how irrelevant debates really are over whether gene editing and Designer Babies should be legal or outlawed. Either we adapt and prepare for the future or be thrown into the dustbin of history. Your choice.