For marine biologists to maintain a staff of professional divers is an expensive responsibility, so Australian industrial designer Dale Wakeham created the Espy 360° ROV, a small, inexpensive remote vehicle to monitor underwater life.

Inspired by pressures like cost and the fact that human divers disturb aquatic life, Wakeham designed the Espy 360° ROV to fulfill a major research responsibility for marine biologists. Much of their work consists of monitoring, testing, and deriving data from the appearance and behavior of underwater flora and fauna.

The Espy 360° ROV uses the 360 Heroes GoPro camera case that fits six camera together to permit a 360-degree range of vision. Wakeham described his project as enabling a Google Street View-type experience for underwater recording.

Wakeham’s design has advantages over familiar Micro Inspection ROVs that are limited by their single cameras and are unstable in shallow waters. The Espy 360° ROV has a self-leveling gyroscope for balanced movement, and its 360-degree camera range guarantees every potential underwater observation. 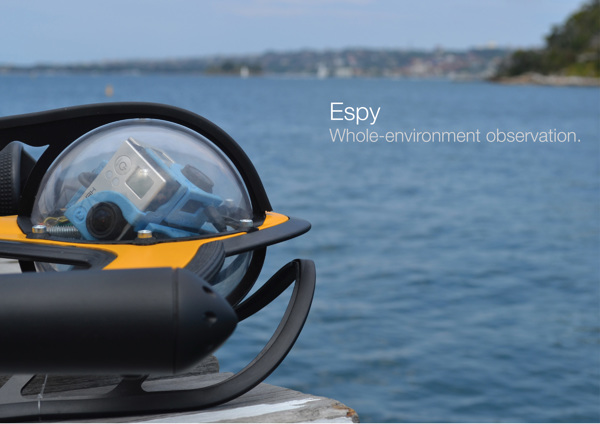 Relying so heavily on human divers, marine biologists run the risk of bankrupting their scientific pursuits. In Australia, costs to maintain diver compliance can run to $200,000, and it’s $15,000 a week to hire a professional dive team.

With the Espy 360° ROV, Wakeham hopes that marine biologists will be able to continue and enhance their underwater research.

The combination of smaller mechanics and cheaper materials makes the Espy 360° ROV a much needed addition to marine biologists’ equipment. With the complete camera range, previously missed observations will be visible. And cash-strapped scientists will be able to perform cost-effective research with the assurance of scientific detail. With the price of materials and electronics dropping so much in the future, scientists will feel a weight lift with their attentions turned towards the research without fear of running-up expenses.

Behold, the Human BrainLook, It’s One of Those Flying Jellyfish Robots!