RssInstagramTumblrPinterestYouTubeGoogle+TwitterFacebook
The era of the physical is quickly being penetrated by the era of the virtual, and we’re all along for the ride. When Facebook had purchased the Oculus Rift back in March of 2014, many people felt a sense of betrayal. They were so fixated on the technological marvel’s capacity of revolutionizing the video gaming industry that they completely missed the forest for the trees. Facebook, on the other hand, did not.

Two years later and Facebook finally gives a “real-world” example of what to expect for the very near future of virtual and augmented reality. Below is a video, which captures Facebook employees Michael Booth and Mike Schroepfer connect in the virtual world, despite their 30 mile proximity difference. And like most friendly reactions today in the physical world, these two colleagues met up on a busy street and took a selfie while veiled by their digital avatars.

“Today at F8, Schrep and I demonstrated a simple exploration we’ve hacked together which shows the potential of VR for social interactions. Physically, he was in San Francisco and I was 30 miles away in Menlo Park, but as soon as we both put on our headsets we were together, sharing the same virtual space.” 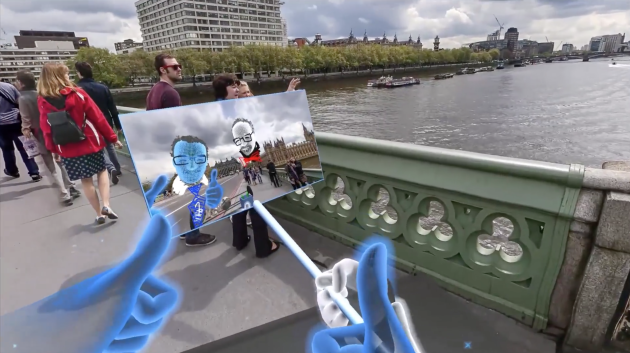 While much more is still needing to be done, this social VR demo by Facebook serves as a sneak peek into a future where people will be able to meet up, as they normally would in the physical world, using VR devices, no matter the distance between them. It creates a virtual social network of which integrates the physical world into an element of connection and emulation.

Also shown below is a video by Microsoft, of which they reveal a real-world demonstration of what they call “holoportation” – the ability to transport yourself from one physical space to another in holographic form. This level of augmented reality technology will help enhance the vision being pursued by Facebook – a vision where the physical and virtual meet and become one in the same. This is the future of which we’re moving towards, and fast. Get ready!