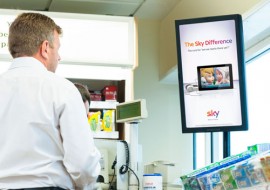 [easyazon-image align=”left” asin=”0805083391″ locale=”us” height=”110″ src=”http://ecx.images-amazon.com/images/I/51KisFUjtoL._SL110_.jpg” width=”69″]Facial recognition tools are still a little crude and very prone to controversy. Facebook’s friendly faces feature that catalog’s tags users set on their photos was the subject of much argument when in was unveiled. But in some kind of middle road between the privacy conscious and the eager business minds, the British grocery chain Tesco will start using face scanners to show targeted ads to shoppers.

Without using technology that may make people afraid of privacy breaches, the scanners judge a shoppers age and gender only and then play an ad based on that guess. There are no futuristic features to the face scanners like pupil recognition, and the scanners don’t store any of the information about the customers. The actual interaction with the scanner is very brief.

While the scanners might remind you of Minority Report, they are still nowhere near that sophisticated. The scanners from that movie recorded your biographical information, recent purchases you made, and referred to you by name. What will be unveiled in Tesco gas stations is more similar to a video advertisement that just makes a guess about what you like based on assumptions made about men’s and women’s buying habits. It’s likely that Google and Facebook know more detailed information about us than the Tesco scanners.

Because of information technology that can catalog huge amounts of user data, advertising in the future will be more and more specific to individuals instead of large, demographic groups. Instead of being delivered advertising that is broad and vague to a person’s unique experience, ads will show information that may be more relevant and helpful. Then, with the technology available, will giving more personal information to advertisers take the edge off of annoying commercials, or will it be the same droning experience?

Bathing in Concept DesignFuture Physics Can Be Influenced By Monument Valley