RssInstagramTumblrPinterestYouTubeGoogle+TwitterFacebook
What do you imagine when you here the phrase “fire ice?” Is it something like a magic trick? A tagline for a new HBO fantasy series? No, it is my imaginary dominion in which dragons dwell. Not quite. Not either of these, actually.

What Fire Ice is is a potentially abundant source of energy for an increasingly energy-starved human world.

Fire Ice is really called Methane clathrate or hydrate, and it is found far below the ocean. Ice submerged in the deep traps clumps of this gas. The ice is able to burn because of the methane that is released from the heat. 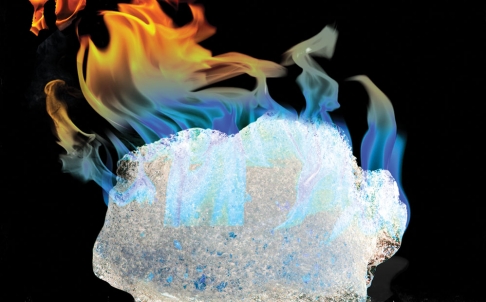 Fields of Fire Ice In the Depths

Researchers believe that it will take 20 years to speculate the availability of fire ice around the world and build an infrastructure to extract it. So the substance is not yet a time-sensitive antidote to peak oil or the energy crisis in general.

Those who need the potential energy the most are countries in Southeast Asia, especially Japan. But, most of the fire ice is actually in waters off of the North American coast. Could the fire ice be a new economic boom?

“I think it’s the ultimate rebuttal to the peak oil and peak gas concept, but of course that’s not much good unless you can develop it.” – Michael Stoppard of IHS

Fire ice is a wild substance to learn about, but should we be investing this much attention and resources into another, non-renewable energy source? The energy crisis derives from the use of fuels that are finite. Talking about fire ice might be useful for a better understanding of physics and chemistry, but how useful is it for creating a sustainable future?

LIVE HD streaming from SPACE! You gotta check this out!Using a Smartphone to Banish Phobias