Medical marijuana has deep roots in ancient and modern societies. Technology will propel the tradition into the future.

Potbotics is the first biotech company that combines artificial intelligence and robots with cannabis, and seeks to capitalize on the traction marijuana has gained both culturally and medically thus far. Potbotics is made up of three divisions: PotBot, BrainBotics, and NanoPot, encompassing the medical, distribution and cultivation sectors of the cannabis industry respectively. The company’s goals are to better inform doctors which strains and blends best match up in treating specific ailments and conditions, give the public unprecedented quantified choice, and elevate industry standards to a higher level.

I had a chance to speak with the Director of Communications of Potbotics, David Goldstein, to learn how each sector functions individually and together in great detail. Below is the transcription of our interview, which goes into the technical aspects of Potbotics and the progressive impact this futuristic technology will have on the medical marijuana industry and the world at large. 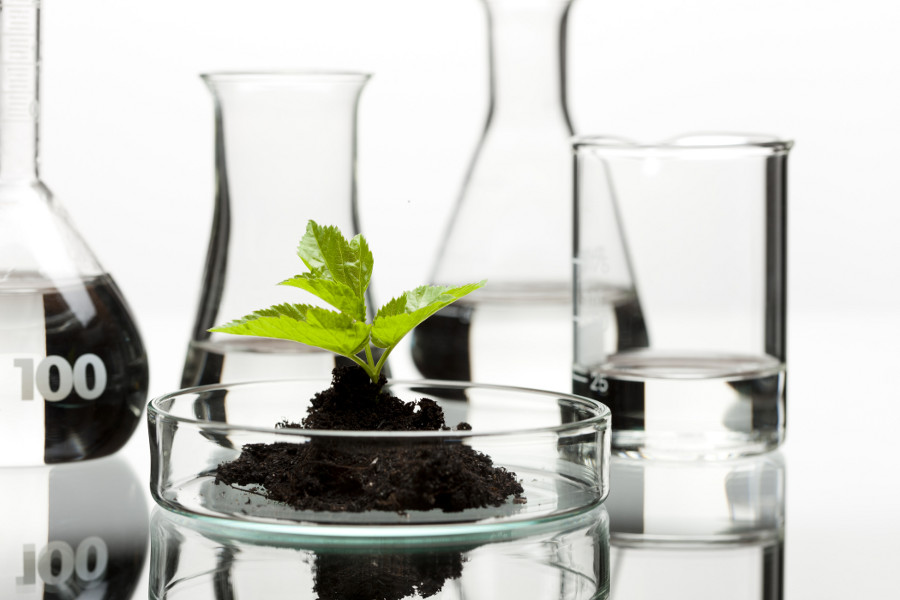 CH: How did the idea of Potbotics first come about?

DG: The company’s founder, Dr. Boris Goldstein, has worked several years in the Artificial Intelligence and EEG-scanning (Electroencephalography) field. Originally, he was using EEG for pre-Alzheimer’s testing, and the way that started is that he saw an opportunity to use EEGs to analyze alpha brain waves to see pre-Alzheimer’s signs. The AI that we use is our proprietary software called AI Net, and AI Net has already been applied in several different fields. NanoPot is nanodiagnostics for cannabis seeds, and we’ll get into that a little bit deeper, but that came about really in the past six years. We did a study on nano-agriculture and the nanoanalysis of the DNA of seeds. We saw all these great applications functioning well in their fields and we realized, with the growing opportunity that is the cannabis market, and the paradigm shift occurring in America where it does look like a lot of states are going to want medical marijuana—maybe even some more states would turn recreational—we saw the opportunity to apply all this technology to the cannabis field.

CH: Everything’s been established but it’s just in this sort of new, uncertain market where it does look like medical marijuana is positively trending. Do you think that being able to quantify this sort of information will help more states adopt the practice?

DG: For what we’re doing we’re the first to market. No one is applying Artificial Intelligence and EEG solutions to cannabis. It really came from the kind of realization that we can use EEG to help understand THC’s effect on the brain and actually quantify that. Currently, if I were to go to a doctor and I was going to get a cannabis prescription…the doctor doesn’t tell [me] “hey you should be looking for this strain” or “hey you should only be doing edibles instead of smoking,” which is better for arthritis. There really isn’t that kind of education because honestly, in our experience, these doctors don’t know much—aside from its health benefits—about the nitty-gritty details of all these different strains because that’s not necessarily medical practice, that’s a separate industry. The positive of [Potbotics] is that it makes doctors better experts because they can base their prescriptions on quantified data, and it makes patients feel more comfortable because the educational process that come from this is one that they know: ‘this was prescribed to me, this was recommended to me, let’s see how this works for me.’ In that case states could see the improvement on the EEG from a person taking this medicine to really help them with what they’re suffering from.

CH: And you’re saying the THC levels correspond with the EEG levels? How does that work?

DG: Let’s use an example. Someone comes in and they have insomnia. So they’ll come in and say they’re suffering from insomnia and the doctor says “I think cannabis is the best prescription for you but let’s figure out exactly what strain you should be looking for.” The kind of blend of indica versus sativa, maybe you need a pure sativa or a pure indica, is important because they release different chemicals. Sativa actually releases more THC and indica releases more CBD, and these both react, in medical ways, differently in the body. Now what that patient would then do is, the doctor would sit them down, put on the EEG hardware, the patient would then consume either a sativa or indica—whatever the doctor was originally thinking was a good prescription, whether they smoke it or take it in a liquid gel form. You’ll then see the brain’s reaction to it, and we’ll be able to see if an extra dose of melatonin, which is the main chemical that lets a person go to sleep, was released in the brain. If so, was it released more or less so compared to other strains? So now we’re really able to hone in on what exactly is the best strain for insomnia. Let’s say we go with a non-mental ailment and go with a physical one, such as arthritis. With our EEG helmet, we’d be able to see whether the pain receptors are being muted in some way. We’re able to see with the scan if that specific strain is doing the best for helping you cope with that pain.

CH: And then also, for example, taking this to the A.I. Net in PotBot, it’s able to learn from these experiences the more it interacts with a subject the smarter the AI becomes, and becomes better at treating others as well. Can you go into that for me?

DG: Another one of our divisions is PotBot, and we like to label it as an artificially intelligent budtender. What it’s capable of is that it can have organic, natural conversations. It’s adept at picking up word cues, and understanding them, processing them, and actually giving organic feedback. You can go up to this machine and ask if it can recommend strains for your condition and PotBot will automatically bring up a list of strains at your local dispensary or vending machine that you need. It’s very much a two-way conversation, and what’s amazing about it is that it runs on this very advanced Neural-Net algorithm that’s actually able to learn from its experiences the more it interacts. All the data is put back in a central location, so interacting with one machine helps machine all the way on the other coast. That’s what makes PotBot amazing. It’s a virtual avatar that you can have an organic conversation with, one that’s able to learn from its past experiences as far as what it did right and what it did wrong. Because it all goes to one central location, all devices running PotBot actually gain from the experiences that one robot has. This benefits doctors that want to have educational kiosks set up in their offices and dispensaries that want help automate and expedite their actual service. It helps consumers because PotBot also has this fun UI where they could learn more if they want to make an account with us, and track what they’ve been consuming and rate it on their own system like a Netflix recommendation. It’s exciting on all fronts. 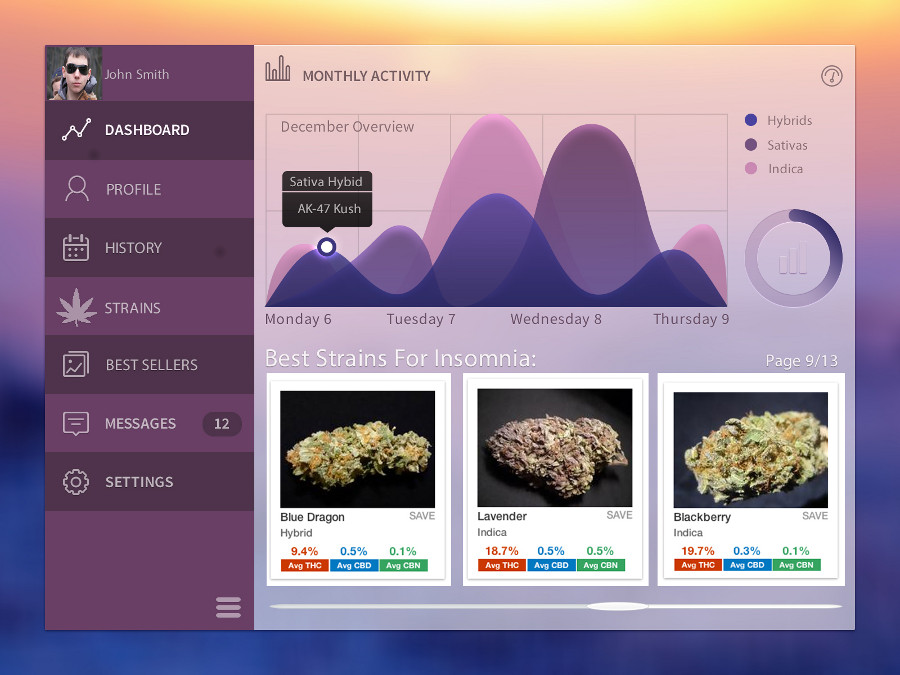 Above: PotBot’s UI shows quantified data tailored to preference and recommendations for ailments.

CH: And this leads us to the last part of Potbotics, which is the NanoPot, and that is based on the cultivation aspect of the industry. How does that fit in?

DG: As Potbotics, what we originally set out to do is benefit every single touch point of the cannabis distribution model. So far we’ve gone over BrainBot, which helps doctors prescribe it and PotBot, which helps consumers make better purchasing decisions. Then there’s NanoPot, and it’s nanodiagnostics for cannabis seeds. We take cutting-edge DNA readers that are able to read the DNA of cannabis seeds and give them fully integrated growth models based on that actual strain’s DNA. Currently in the industry, there’s best practices for growing. Every grower has their own secret for how they do their own growing operation, whether its how much water they give, how much nutrients they give, what kind of fertilizer they use [etc]. What we’re offering is actually a growth plan tailored from that plant’s DNA. By doing that, we’re able—as we’ve seen in the past—to produce up to 20% higher yields for specific strains because we’re giving the correct amount of irrigation, the right UV filters, and the right nutrients that that plant needs to grow to its fullest potential based on its actual molecular coding.