RssInstagramTumblrPinterestYouTubeGoogle+TwitterFacebook
Throughout history human beings have relied on body art to help them express their individual selves. Whether it was a story of their lives or merely something of which they thought looked unique, getting a tattoo has become an ancient practice that’s transcended time itself. In the United States alone, around 14% of the total population have at least one tattoo, and over 70% of them are between the ages 18 to 40.

What started off as pouring ink or ash onto a carved wound has now turned into a mechanical thing of beauty, using nothing more than ink, a needle, and an electric tattoo machine. Thanks to French-based company Appropriate Audiences, this process is getting an upgrade with the help of 3D printers! 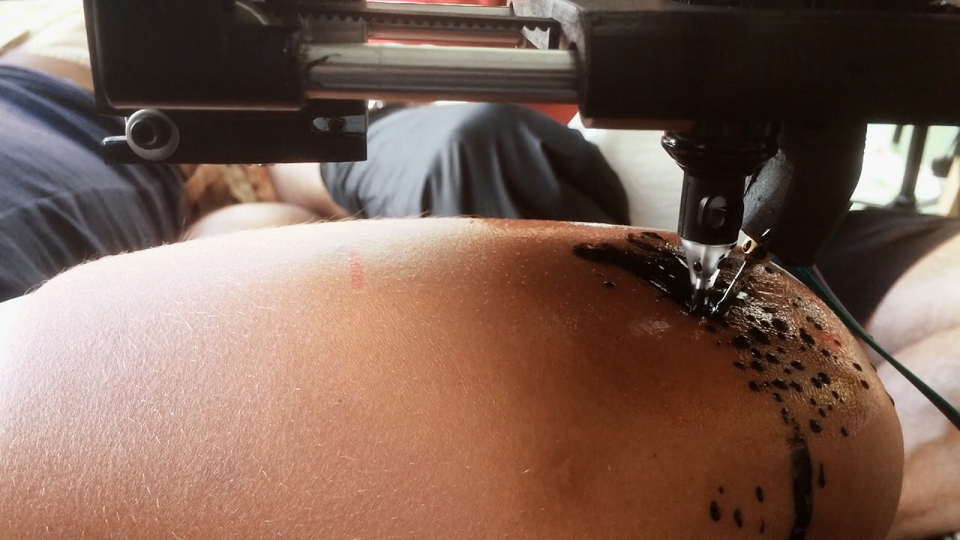 “We hacked a 3D printer to raise new issues about the future of tattooing. Our goal is to offer a new tool for tattoo artists.”

What originally started as a challenge set by France’s Culture Ministry and Paris-based design school ENSCI les Ateliers, the founders of Appropriate Audiences decided to hack a 3D printer and test its capability of design using nothing more than a pen. When shown to actually work, from thereon in, 3D printing tattoo machines were born. Given a 3D printer’s accuracy, it’s crazy to think that this hasn’t been tried before, but one of the biggest challenges they faced wasn’t so much making the process work, but rather keeping the skin taut in order for the printer’s accuracy to be precise.

According to Appropriate Audiences, whom Serious Wonder briefly spoke with, these 3D printing tattoo machines aren’t necessarily meant to replace tattoo artists, but merely act as another tool in a tattoo artist’s arsenal. However, given the rate of growth we’re seeing with 3D printers, it won’t be that long before they outperform even the best of human artists throughout the world. Both above and below are videos showing Appropriate Audiences’s 3D printing tattoo machine in action.

For now, these tattooing 3D printers can only provide relatively simple designs that only cover small areas of the body. They’re certainly no match to today’s skilled tattoo artist, but they will be someday, and soon. The idea of a robot becoming an artist isn’t exactly an unreasonable idea. Sure, there are those who’ll argue that art requires emotion, but ignoring any possibility of future robots becoming sentient to the point of expressing emotions, being a tattoo artist has little to do with emotion and more to do with precision. So long our future robots, whether they be advanced 3D printers or otherwise, are capable of providing a tattoo for a customer without error, your future tattoo artist may not even be human.