RssInstagramTumblrPinterestYouTubeGoogle+TwitterFacebook
Not too long ago, Google (now known as Alphabet) went on a shopping spree for robotics companies. One of those companies was the mysterious Japanese startup Schaft Inc. Since the startup’s acquisition, Schaft was redirected to the equally mysterious research and development facility known as X. Since then, not much has been known of what Schaft has been doing under the new Alphabet ownership… until now.

When Schaft CEO Yuto Nakanishi walked on stage at this year’s New Economic Summit (NEST) in Tokyo, no one truly knew what to expect. Little did we know that at least one of our questions would be answered when Nakanishi invited two bipedal robots on stage with him and then presented a video of the ‘bots in action.

“The robot (as yet nameless) is meant to be practical, affordable, and energy efficient. The video shows it can carry heavy loads and keep its balance on uneven terrain and uncertain footing—a necessary but notoriously difficult feat for two-legged robots.”

The video mentioned by Jason Dorrier in the above quote is provided below. 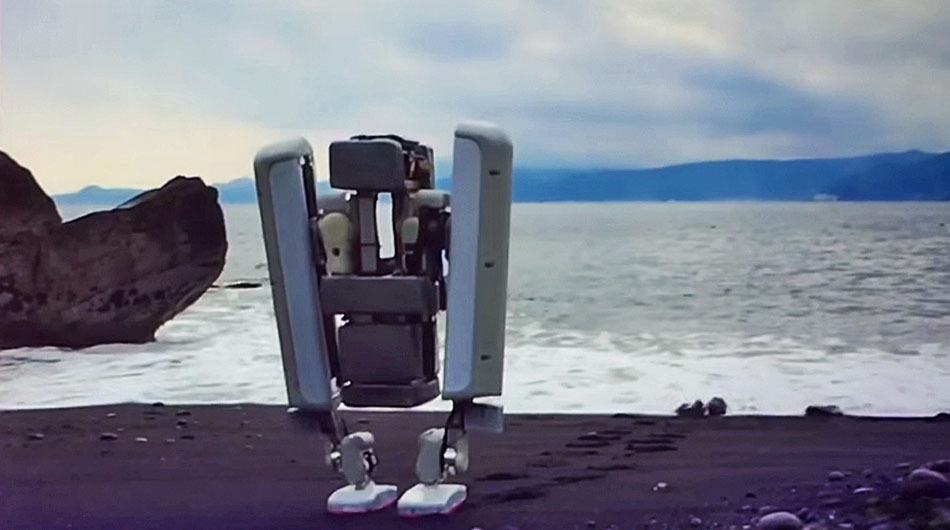 Not much is really known about these robots other than the fact that they were engineered by Schaft researchers under the leadership and funding of the formerly known Google. The robots don’t even have a name yet, though do take on a very familiar appearance of the artificially intelligent TARS robot in the hit sci-fi film Interstellar. Have these bipedal robots learn how to tell jokes and smart ass replies, and you’d have an early model TARS.

Though by the video alone, one can easily depict certain features and motions by the unnamed robot and its potential. Whether they’re walking on the beach or on a steep wooded terrain, these bipedal robots are capable of maintaining balance. With its center of gravity sitting snug between its legs – like its batteries and motor – the legs themselves do most of the work, including a bit of cleaning.

It isn’t all too clear what Google (er… I mean Alphabet) is aiming for through the acquisition of Schaft Inc., nor what they hope to achieve with these bipedal robots, but there’s no doubt they look absolutely bad ass! And considering they take on a physical substrate that looks more like TARS than they do an actual human, I’d wager a guess that the company is looking at various different physical feature options and seeing what all they can do.

Which makes sense, in my opinion. When I think of the human physical body, I don’t exactly think maximum potential. Sure, we’re able to compensate for our limiting capacities to achieve great things, but unlike us, robots don’t need to be stagnated by said capacities. They have the potential of being so much more and be applied to achieve even greater things. Eventually robots of all kinds will be walking (amongst other forms of locomotion) among us. Schaft’s bipedal robots are merely the beginning.