The eco island is the next step in noninvasive architecture that actively improves the environment. To commemorate the 50th anniversary of Cancun’s development into a worldwide tourist destination, designer Richard Moreta Castillo has envisioned the Grand Cancun eco-complex, expected to be completed in 2020.

The island’s concept was inspired by Cancun’s Mayan translation, ‘nest of snakes.’ In similar fashion, the wind-powered centerpiece is also shaped like the Mayan serpent god Kukulkan. The mega stilts that will hoist the complex above water are branch-like and allow the platform to minimize its footprint and avoid damaging the ecosystem. An elevated, ultra-quiet, high-speed electric train would also run all season to and from the eco island. 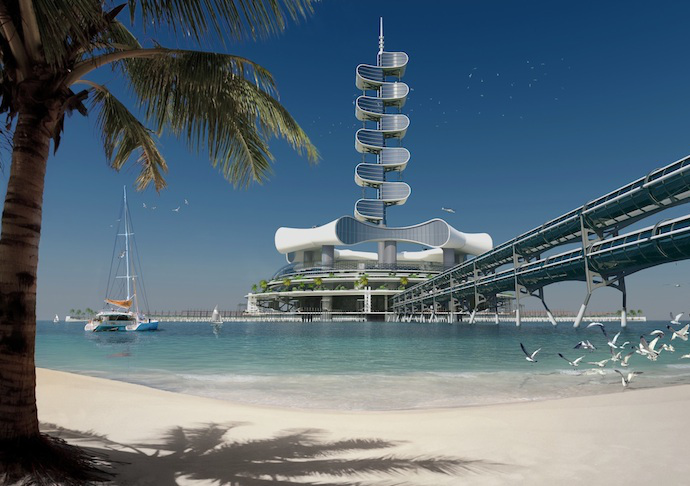 The interior of the complex houses a number of clean energy systems. The offshore platform’s surface will be completely covered in solar panels that will not only provide energy for Grand Cancun, but also for the main city’s national grid. In addition to providing solar power, the compound is equipped with both vertical wind turbines and underwater tidal wave energy collectors in order to maximize clean energy production. It will also be equipped with a rainwater collection system that can filter and reuse water through a mini desalination plant. All of these amenities allow for the luxury complex to be completely self-sufficient, and Grand Cancun will generate 40 MW/h of wind energy and 47 MW/h of tidal energy–enough to supply power for 87,000 homes.

[easyazon-image align=”left” asin=”0684818450″ locale=”us” height=”75″ src=”http://ecx.images-amazon.com/images/I/51WalOTQDcL._SL75_.jpg” width=”49″]The Grand Cancun mega project is a marine platform that won’t leave a carbon footprint in the area. It will remediate the ocean site which it’s placed in, and filter out hydrocarbons and pollutants. This would ensure a symbiotic relationship between the ecosystem and vacationers without sacrifices from either party. The site will also have a research center beneficial for marine biology, ocean engineering and ocean scientists/developers.

Project Grand Cancun bested 69 other entrants to receive the Radical Innovation in Hospitality Award. It has also garnered First Prize in the National Architecture Awards of Dominican Republic in 2012.

The Grand Cancun isn’t just a site that’s carbon neutral, it’s a site that will actively improve the ecosystem that it inhabits. Once it debuts in 2020, we’ll see more structures of its kind pop up, both on water and land, that actively improve the environment, whether it be for air quality, deep soil, or atmospheric ingenuity. Clean energy efficiency standards would, in turn, increase beyond mere neutrality, and vastly improve our quality of life overall.