Humans are the 3d-Bio-Printers of the Universe. 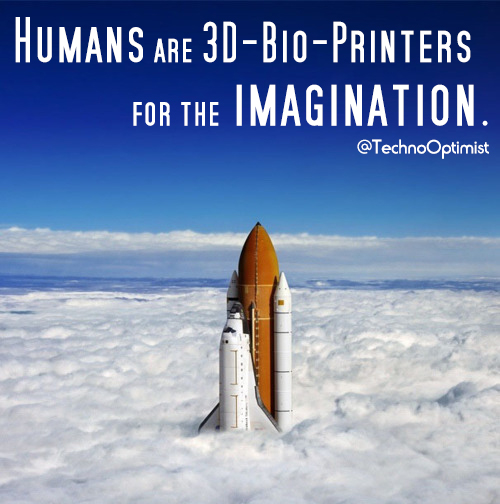 Humans are the 3D bio-printer for the imagination. 3D printers allow us a perspective of what we do as humans. As Jason Silva said “we take in matter of low organization, put it through our mental filters and extrude it in the form of space shuttles and iPhones”. We have 3-D modeling software inside of our heads; a neuronal AutoCAD that renders objects through high precision, seven dimensional, organic, self healing arms and hands.

Carl Sagan famously said “we are a chance for the universe to know itself”. With this perspective, I see humans as a tool for the universe to create itself. The universe has created structured complexity of atomic matter with the ability to modify and manipulate that matter on the atomic level. We are that structured complexity, we compete entropy with creativity. The Universe has created every perceived beauty and every spectrum of cruelty, from supernovas to black holes, from the dark ages to the enlightenment. We now have the knowledge and the perspective that we yield the power of God. What type of God will we be? Where Oppenheimer quoted; “I have become death destroyer of worlds”, could the creators of of atomic precision manufacturing not say; “I have become God, creator of worlds”?

[easyazon-image align=”left” asin=”0670025402″ locale=”us” height=”160″ src=”http://ecx.images-amazon.com/images/I/51xwxtvcWfL._SL160_.jpg” width=”106″]Craig Venter, the American visionary geneticist and entrepreneur has a new book “Life at the Speed of Light: From the Double Helix to the Dawn of Digital Life“. In the book, he and his team document building a digital-biological converter that converts biological information into digital information like a “teleporter.” “We found a way we can move proteins, viruses and single human cells at the speed of light,” he said. “We can digitize biology, send it at the speed of light and reconfigure the biology at the other end.” This is essentially directed panspermia. It’s interesting that Watson and Crick, the discoverers of the Helix, believed that life was seeded from space (panspermia).  Just a few decades later, we now yield the power to send technological extensions of our imaginations to other planets and print life itself.

“The ultimate crunch in consciousness, biology and digital will manifest as digital gods. We are becoming this now.” – Gray Scott

Bolid: An Automated Tractor For the Future FarmerWatch Felix Baumgartner’s Stratos Jump From His Perspective