Self-healing battery electrodes are an exciting development for lithium ion based products. Scientists at Stanford University’s SLAC laboratory have developed electrodes that are able to heal the small cracks in silicon that come from repetitive battery operation, as reported in the Nov. 19th issue of Nature Chemistry.

Silicon electrodes are a prized commodity for charging and conducting purposes in lithium ion batteries. They have a high capacity for absorbing and releasing lithium ions from battery fluid, and can hold triple the amount of energy of a standard lithium battery. Each time the battery charges and discharges, however, silicon electrodes swell up to three times their normal size and shrink back down again, causing them to crack and degrade battery performance over time.

All of this can change with the creation of self-healing electrodes. Inside the electrodes are polymers with weak chemical bonds that become attracted to each other when silicon cracks and splits open from the charging process. Stanford professor Zhenan Bao, who’s lab was used to develop the electrode, says that “silicon electrodes lasted 10 times longer when coated with the self-healing polymer, which repaired any cracks within just a few hours.” 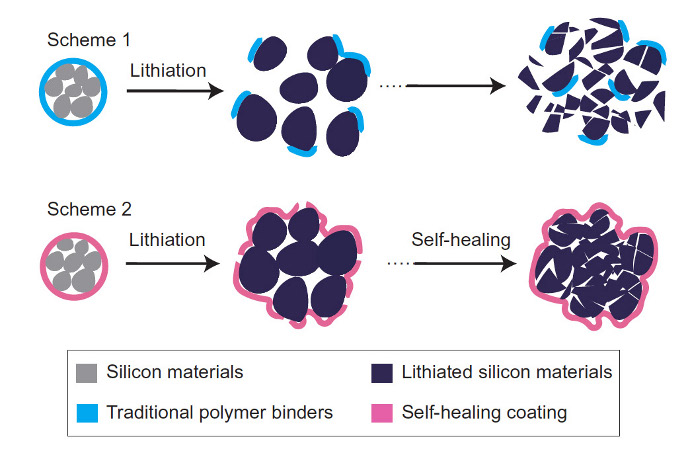 Above: Conventional polymer vs. Self-Healing polymer.

The idea for this self-healing polymer was inspired by earlier research, also at the SLAC laboratory, on flexible robotic skin that can heal itself upon reaching room temperature. For the battery project, Stanford researcher Chao Wang added tiny nanoparticles to the polymer so it could conduct electricity.

“Self-healing is very important for the survival of and long lifetimes of animals and plants,” Wang said. “We want to incorporate this feature into lithium ion batteries so they will have a long lifetime as well.” Silicon-equipped lithium-ion packets are said to appear in the next two or three years as the most viable option for renewable, longer-lasting batteries.

While the prospect for lithium ion batteries is incredibly exciting for future batteries, the self-healing polymer could be used for an array of purposes for either top-down or bottom-up nanotech. On a macro level, for example, windshields could be coated with a similar polymer to prevent tiny cracks from branching out into bigger problems. Back on the micro level, if we could tinker with and use this self-healing polymer, it may be used to enhance cancer-fighting and stem cell research. While nanotech is still in its early stages, its capabilities are set to grow exponentially over the next 20 years.