RssInstagramTumblrPinterestYouTubeGoogle+TwitterFacebook
On May 18, 2017, renowned Futurist, Social Engineer, and founder of The Venus Project, Jacque Fresco, peacefully passed away at the age of 101 after battling with Parkinson’s Syndrome. As requested by Mr. Fresco, his body was donated to science.

Although saddened by this unfortunate news, he will always be remembered and celebrated for leaving behind a future of hope and progress for Earth and its inhabitants through science and technology. I’m grateful to have had the opportunity to interview Mr. Fresco late last year, which you can read here on Serious Wonder.

Mr. Fresco has invaluably inspired many throughout his life, including myself, to remain passionate, persistent, and perseverant in our journey to improve the quality of life and the human condition for future generations – on and beyond Earth. 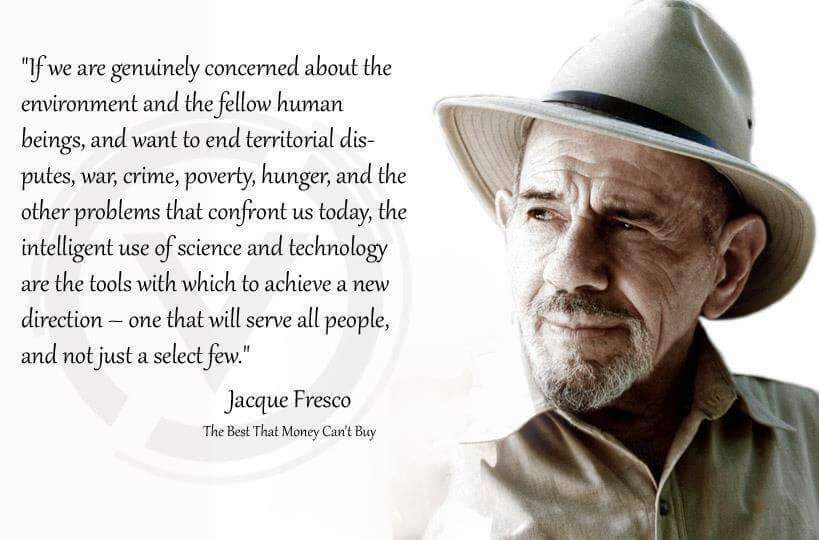 Like other Futurist pioneers before him, such as FM 2020, Jacque Fresco has been, and will always be, a Superman for the future of humanity.

The following is an Open Letter from Roxanne Meadows, co-founder of The Venus Project, following the passing of Jacque Fresco:

I have received so many letters over the years saying how much people have been inspired by Jacque Fresco. He helped them better understand what was going on in the world, but most of all they expressed that he has given them hope by presenting an alternative society we can work towards to overcome the disastrous conditions we face as a species. Therefore, it is very difficult to let you know that Jacque died peacefully on the morning of May 18, 2017, at 101 years of age. There were many close friends with him the last few days of his life. There will not be a funeral or ceremony held. His body was donated to science as he requested.

Jacque was diagnosed with Parkinson’s Syndrome in recent years and this made his directorship and participation with The Venus Project more difficult. During this time I became a full-time caregiver while furthering the work we have done together for the last 41 years. As the tour seminars became harder for Jacque, I predominately carried them and will continue to do so. As co-founder of The Venus Project, I will now devote more of my time and energy to carrying it forward as Jacque and I have always planned. Many others want to help bring this work to fruition and there is a very dedicated group of people who are doing just that.

The Venus Project will go on towards our aims and proposals and as Jacque and I always say, “if you want a better world you have to work towards it. If you do nothing, nothing will happen.” As I see it, we are fortunate to have the lifetime of Jacque Fresco’s work to provide a comprehensive direction to move towards; something our world is lacking and desperately needs. So, as always, we need your participation to make it happen. There is lots of work to do! If you have questions or concerns contact tvp@thevenusproject.com

Cyborg Dad Fights to Regain Custody of Children – You Can Help
November 16, 2016

Westworld and the Human Connection with Our Future Companion Robots
November 4, 2016
Subscribe to our Newsletter
LATEST ARTICLES