1.) Dawning a Second Skin: From Wearable Gadgets to Breakthrough’s in Medicine
Researches from the University of Tokyo have developed a multipurpose electronic skin, no more than a nanometer in thickness and near indestructible. This life-like membrane offers the future potential to monitor your vital signs, be a second skin for robots or prosthetics, and may allow you to wear your smartphone like a sleeve.

[easyazon-image align=”left” asin=”B00DR0PDNE” locale=”us” height=”160″ src=”http://ecx.images-amazon.com/images/I/31Hgfy4y9DL._SL160_.jpg” width=”121″]2.) Google Chromecast
The new Google Chromecast is now available to consumers. For $35 dollars you can have a two-inch device similar to a thumb drive that allows you to stream content straight to your television via a Wi-Fi signal. Thus, your tablet, computer, or phone becomes your remote. Enjoy an easier way to watch online music and videos right from your television!

3.) DARPA’s Bionic Prosthetic Arm that can FEEL
DARPA introduces a bionic prosthetic arm that allows the amputee to actually feel a touch sensation. Via a flat interface nerve electrode (FINE), the prosthetic is able to stimulate the nerve endings, sending a message to the brain that allows the person to experience the sensation of actually touching something. 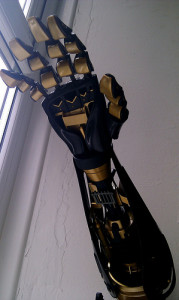 4.) Will the First Inception be Made Possible through Mice?
MIT scientists set out on an experiment to further study something called ‘False Memory Syndrome‘ in which the human brain fabricates a series of events that never actually occurred. Through this study they were actually able to effectively implant false memories into the minds of mice by manipulating cells that lie deep in the hippocampus. Journalist for Engadget, Melissa Grey, assumes that the probability of incepting the dreams of these little creatures is just around the corner.

[easyazon-image align=”left” asin=”B005IMB5NG” locale=”us” height=”160″ src=”http://ecx.images-amazon.com/images/I/414PJA9c8XL._SL160_.jpg” width=”135″]5.) A Tooth that Tells Your Doctor What You Ate for Breakfast
Researchers from the National Taiwan University in Taipei are in the process of developing a Bluetooth (no pun intended) device that uses an accelerometer to determine what exactly you have been putting in your mouth. By assessing each particular oral movement, this fake tooth can conclude if you have been smoking or drinking and how many times a day with a 94% accuracy rate. All of this information is then sent to your doctor for evaluation. Hence, you may think twice about that next martini if you had this little device in your mouth!

DIY Biohacking: Coming to a Lab Near YouWearable Technology: Bend it, Wash it, Wear it