“In this work, we show that [Machine Learning] is a promising technique to study galaxy formation in the backdrop of a hydrodynamical simulation. We use the Illustris Simulation to train and test various sophisticated machine learning algorithms. By using only essential dark matter halo physical properties and no merger history, our model predicts the gas mass, stellar mass, black hole mass, star formation rate, g−r color, and stellar metallicity fairly robustly.” 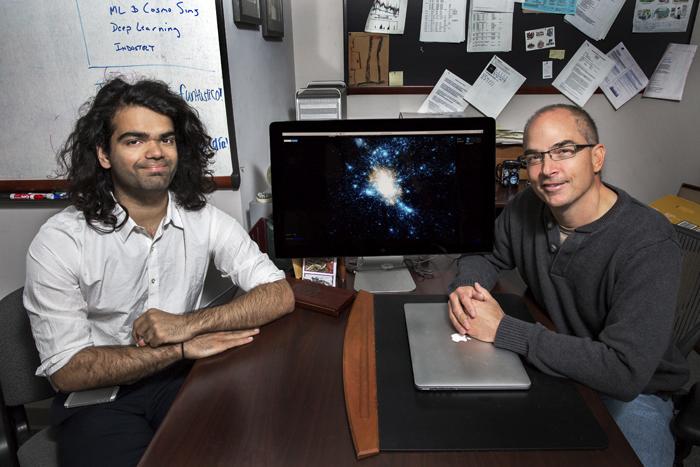 Cosmologists commonly use two different simulation approaches to study formations in our universe. Firstly there’s N-body simulation, which models how dark matter collapses under gravity. When coupled with a semi-analytical model, astronomers are then given a glimpse at how galaxies form. The second approach, known as a hydrodynamical N-body simulation, models how matter and dark matter interact under gravitational collapse. As a result, astronomers are then shown how invisible clumps of dark matter, known as halos, influence star formation.

The problem is that, when using hydrodynamical simulations to study these formations, it requires millions of hours of supercomputing time. As the two papers show, however, when using a Machine Learning algorithm, computing time is then cut down to mere minutes, allowing researchers to now create quickly simulated maps of galaxies.

What is Machine Learning?

Evolved from the study of pattern recognition and computational learning theory in artificial intelligence, Machine Learning is a subfield of computer science which explores the study and construction of algorithms that can learn from and make predictions on data. [Wiki]

The ability to study the early formations of our stars and galaxies using an artificial intelligence (A.I.) has deep ramifications to the future of cosmology. In the last decade alone, we’ve learned more about our universe than the centuries of study combined, all because of advanced simulations developed using Machine Learning and other complex algorithms.

As we continue advancing our A.I. systems and apply them to the study of our universe, don’t be surprised of a sudden explosion of scientific discovery to commence as a result. There remain many more mysteries about our universe that are ready to be discovered. But with the help of A.I., those mysteries could very well soon be unlocked.

First Ever TED Talk Delivered By a Robot – And His Name is BobThe Future This Week: Mars, Gene Editing, and a Cashless Society