Softening the City with Noise-Cancelling Technology 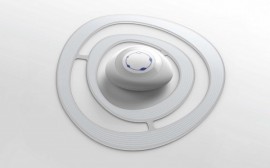 [easyazon-image align=”left” asin=”B007G95FJE” locale=”us” height=”110″ src=”http://ecx.images-amazon.com/images/I/41za%2BrcWr9L._SL110_.jpg” width=”76″]Noise-cancelling headphones are an ideal object for an international flight. Long hours of listening to young children pestering their parents, overhearing the pilot’s turbulence precautions, and trying to ignore the drone of jet engines is agitating at the best. Even if you don’t have noise-cancelling headphones, the disquiet on board an airplane eventually dissipates when you return home from the airport. But what if home is New York City, and your bedroom is just as persistently noisy as a passenger’s experience in a plane?

Since 1905, the New York Times has published stories chronicling NYC residents’ battle with volume. The Times even included a slideshow of reader-suggested places of solitude and quiet in the swelling city. New York won’t become decibels quieter within years, but there are attempts to make any individuals sonic experience more palatable. 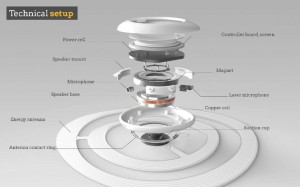 Industrial Designer Rudolf Stefanich created a prototype device that effectively acts as a noise-cancelling headphone for your whole apartment. Using active noise control technology, the same system that conventional noise-cancelling headphones use, the Sono, Stefanich’s invention, analyzes sound outside of your apartment and plays it back asynchronously. By creating an “anti-phase” to the original sounds compression phase, the Sono adds a negative to the police siren’s positive, for example, nullifying the noise.

The Sono attaches to a window, and it can even filter out so-called e-noise, like signals from Wi-Fi routers. Like a more basic white-noise device, the Sono can playback sounds of nature instead of creating an absence of noise altogether. Most interestingly, it can filter exterior sounds and select which noises to reject and which to project. Presumably, a bird’s call could be left intact but the honking horn would be blocked, even if both were from the same area.

There’s no doubt that cities are rising in their economic and social consequence. More and more people are moving to them all over the world. But we’re well aware that cities have a galaxy of problems, among them, noise. But with tools like Sono, people will be able to retreat in the city when they need to, and participate in the creative chaos that they inspire. If people have the opportunity to recuperate from the stress of noise whenever they return to their homes, it may mean that attitudes will be more positive in social circumstances.