RssInstagramTumblrPinterestYouTubeGoogle+TwitterFacebook
In light of the recent news where the Australian government officially criminalized the mere act of owning blueprints to 3D print a gun, it certainly raises the question of how other countries will handle the future prospect of advanced 3D printed weaponry. The ownership of a gun is already a controversial topic currently being debated here in the United States, and with 3D printed guns now being added into the mix, the controversy is likely to become exacerbated.

While controversial, one designer decided to look past its current taboo status and instead 3D printed a .22LR revolver which he calls the PM522 Washbear. Printed in only two and half days, the majority of the gun was designed using a 3D printer, except for the roofing nail, some elastic bands for springs, and the required amount of detectable metal in the grip. 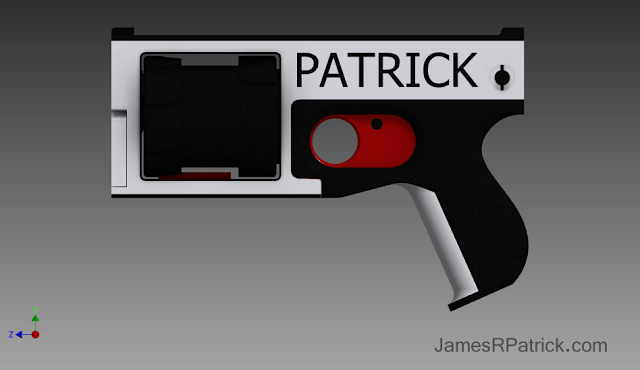 The Washbear was printed by James R. Patrick, an engineer and gun enthusiast. Given his love of guns, which he had his father to thank for, his interest in them grew beyond mere enthusiasm and instead entered the realm of engineering. Though to understand more about Patrick’s latest design and what his thoughts of the future are, Serious Wonder decided to have a chat with him (discussion below).

Q: So firstly, what was it that inspired you to 3D print a revolver in the first place and how do you differentiate it from other weapons 3D printed thus far?

A: In previous years, there have been other attempts by hobbyists to design printed repeaters. Yoshitomo Imura designed the Zig Zag revolver, and WarFairy designed the Imura revolver (named after the previously mentioned designer). In both cases, development stagnated before they were proven fully functional with live ammunition. I decided to take up the challenge, incorporating elements from my single-shot Songbird pistol design. It’s unexplored territory, that’s what makes it exciting.

My Washbear design can be differentiated from the Zig Zag revolver by its double-action-only functionality. The Zig Zag had to be cocked before each shot, and we don’t know if it would even survive live ammunition.

It can be differentiated from the Imura revolver by its ability to be disassembled for maintenance(the Imura is permanently glued together) and the use of a pepperbox-type cylinder. The Washbear also doesn’t have to rely on metal chamber inserts if Nylon filament is used to print the cylinder.

There are a couple of printed pistols made by Solid Concepts which outperform my design in every way, but they use a $500,000+ printer. By contrast, the Washbear prototypes were printed with a $1000 printer.

Q: How long did it take for you to 3D print all of the necessary parts and then assemble them?

A: My friend FP from FOSSCAD actually did all of the printing and testing for my design. It took him about 60 hours to print the parts and probably a couple of hours cleaning and fitting the prints.

Q: Lastly, how do you envision the future of 3D printed weaponry as printers become more efficient and far less expensive?

A: I expect to see prints that are more consistent across printer models and just overall better quality. We’re finally at a point where consumer 3D printers are reliable enough to finish a 24-hour print. I also expect new filament materials to play a big role in the capabilities of printed firearms. Already we’ve seen that a barrel printed in Nylon can have a lifespan over ten times that of the same barrel printed in ABS. With this in mind, the designs will likely evolve to account for a much greater expected lifespan.

While the future of 3D printed weaponry might appear bleak no matter where you look at it – both criminalization and proliferation – if I were a betting man, I’d say that any efforts of criminalizing them will be ultimately futile as 3D printing becomes far less expensive and far more open source. The PM522 Washbear is merely the beginning and there really isn’t much we can do to stop it. Instead we should be emphasizing on education and the safe uses and printing of future weaponry.

In a future where a decentralized market of proliferated futuristic weaponry are at an abundance, an emphasis on advanced defensive technologies might be prudent. We’ll likely witness the design of bullet-resistant 3D printed clothing or the open source use of cloaking technology. To keep a close eye out on the streets, where gun-related crimes might occur, the combination of drone surveillance and layperson sousveillance will help monitor each and every corner of each and every street. There’ll surely be those who will feel somewhat daunted over the mass open network of sousveillance, but given the ramifications of the contrary, I suspect that a majority of the population will likely embrace it with open arms.

Star Trek Philosophy: “We were like you once, but we evolved.”Blue Origin Defeats SpaceX In Landing Reusable Rocket