The Robot, the Hero 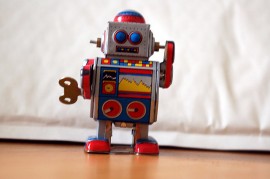 [easyazon-image align=”left” asin=”1936749750″ locale=”us” height=”110″ src=”http://ecx.images-amazon.com/images/I/51ce5l9GPcL._SL110_.jpg” width=”88″]Robots that attend to human needs have peppered science fiction since Rosie swept under George Jetson’s feet. Most representations of helper robots tend to look and behave something like sophisticated kitchen appliances. There’s a new humanoid robot manufactured by the U.S. Defense Department and robotics company Boston Dynamics that is superior in every way to any house-cleaner bot. Atlas is a robot that might be closer to our realization of Superman. 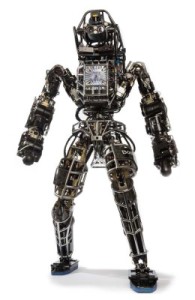 Designed to do the tasks most dangerous to people, like fighting fires or examining a damaged nuclear facility, Atlas stands at a very human six feet, and is no heavier than a football linebacker. With a head-mounted laser-ranging device, Atlas can receive real-time, 3D images of its environment.

Atlas was inspired by PETMAN, another military-funded robot that showed stunning, lifelike movement. In controlled tests, Atlas has shown fluid movement like leaping from a platform or traversing a gap by supporting itself between two walls. Even when researchers bludgeoned Atlas with a 20-pound weight, the robot maintained its balance, immediately correcting for its displaced weight.

With articulated and sensitive hands, ATLAS is able to manipulate tools with dexterity comparable to a human.

For anyone worried that with military funding, ATLAS will be used in conflict, its purpose is only for civilian or humanitarian work.

The quality and efficiency of robotics is increasing exponentially. ATLAS presents an opportunity for work that is dangerous to people to be performed with more safety to individuals. As ATLAS and robots similar to it become more dexterous and agile, there will be less reason for people to put themselves at risk. As with most robotics, ATLAS is also an opportunity to secure more contemplative leisure time because labor is distributed to advanced robots and not humans.