RssInstagramTumblrPinterestYouTubeGoogle+TwitterFacebook
In Part Three we discussed union rights for sentient human beings, so let’s just assume that robots have since passed the Turing Test, and their sentience was validated. Does this then mean they can receive every other right given to their fellow human workers? If not, why not? An efficiency argument isn’t enough to sustain this argument. Even human workers are not valued on efficiency alone.

You can’t argue that they’re “not alive” or “aren’t consciously aware” of their life. They’re sentient; they’re both alive and consciously aware of their life. How susceptible are they to being exploited by employers, then? Machines, like humans, are used to build and design their products as fast as possible with an efficient cost-benefit. With the robots being sentient, are they not just as susceptible as humans in being exploited for their labor, regardless of the gap between a human and a robot’s efficiency? 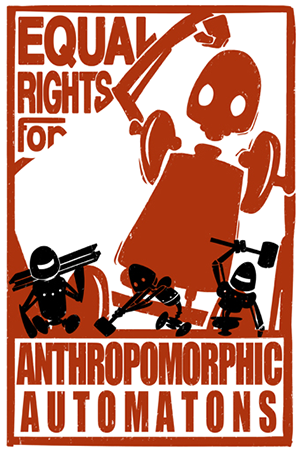 Emotional remarks of robots “stealing our jobs” will emerge, even as their sentience is validated. But then, even if technological unemployment emerges, people would be able to focus on what they always dreamed of doing. An even better question would be, wouldn’t the robots also deserve to do as they pleased, rather than be forced into pre-determined labors?

What we’re talking about here is a full-scale immersion of a human-robot work (and living) force. But then how will we react when the machines we might deride as “robbers of our jobs” begin demanding their right to unionize?

According to philosopher Richard A. Cohen:

“The humanity of the human does not arise from an animal or machine evidencing logic or the rationality of means and ends… Rather, the humanity of the human arises when an animal or any being, is moved not by efficiency but by morality and justice. A being becomes moral and just when in its very sensibility, and across the pacific medium of language, it finds itself desiring an undesirable and insatiable service for the other, putting the other’s need before its own.” (Cohen, Ethics and cybernetics, pp. 164-165)

Whenever we’d see injustice at the expense of a robot, and then do nothing about it, are we not then betraying Richard Cohen’s definition of what makes someone “Human” – to be “moved…by morality and justice”?

This is why we cannot search for sentience in robotics under either an anthropocentric or anthropomorphic point of view. Both rely too heavily in the sole understanding of humans rather than consciousness itself.

Instead of looking to Cohen for a sufficient means of how we should address robots – especially sentient ones – I find that Cynthia L. Breazeal’s understanding of humans and robots’ relationship with one another merits greater justice for both:

So should robots be able to unionize? Unfortunately, this question will not be solely answered by the court via a Turing Test. A court’s decision of a robot’s sentience will come as a result of pressure by the masses who are fighting for robotic rights, which also includes the pressure given by robots themselves as they protest and commit civil-disobedience. The question of a robot’s sentience will be answered by the majority of the populace before the courts ever find the heart to recognize it as well.

Though I’m sure this will be a controversial thing to say sooner or later, I do believe robots deserve the right to unionize alongside Human workers.