RssInstagramTumblrPinterestYouTubeGoogle+TwitterFacebook
Do you remember when you were a kid and you pretended to be talking to someone on the phone? You’d place your finger to your ear and begin speaking. It was one of many facets of a child’s imagination. But what if you could actually turn your hand into a phone?

Thanks to the incredible team at Innomdle Lab, that child’s imagination has finally turned into reality. Say hello to Sgnl! 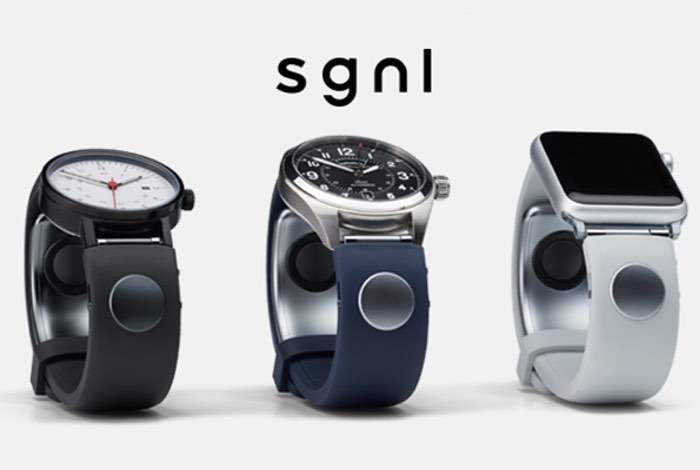 “Sgnl is the smart strap that enables you to answer phone calls through your fingertip. Simply place your fingertip to your ear while [speaking] through the embedded microphone. Replace your existing watch strap with Sgnl and you’re done, whether you wear a classic watch or an Apple Watch, Samsung Gear, or Pebble Time.”

Sgnl is really nothing more than a wristband that connects to your smartphone via Bluetooth. Through what they call their Body Conduction Unit (BCU), sound waves are then generated and conducts vibrations from your wrist upwards to your index finger. It’s really based on the same premise as that of bone conduction, whereby sound waves vibrate throughout your skull and generate clear sound by your ear drum.

Inside the BCU there is an actuator unit which helps generate body-conductible vibrations with low power consumption. In order to actually hear the person on the other end of the phone clearly, Innomdle Lab created an algorithm which selectively amplifies voice signals with proper wavelength modulation.

Though Innomdle Lab needs your help. In order to get Sgnl out into the market by February of next year, they’ve reached out to the community with a crowdfunding campaign on Kickstarter. They’ve already reached their funding goal, but if you want to make it better, make a contribution today!

When I first learned about Sgnl, I immediately began thinking about the 2012 remake of the sci-fi film Total Recall. Specifically, the implanted phone inside of the agent’s hand. When a call was placed, their hand would begin lighting up. They’d press on a specific position of their hand, raise it up to their ear, and begin speaking. It was such a simple design, with very little CGI needed, but it had my mind racing with possible applications in the future. And now, we have Sgnl.

Granted it’s not an actual implant, but I’d argue that it’s a stepping stone towards that ultimate direction. It challenges our perceptions of what a phone really is. It challenges our perception of how our biological bodies should and can be used. There are many who already consider us “baby cyborgs” because of our reliance on smartphones. Though with Sgnl, Innomdle Lab is simply strengthening that idea by creating a somewhat symbiotic relationship between our gadgets and our own biological substrate.