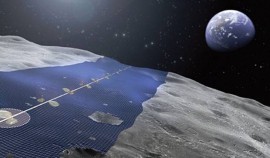 [easyazon-image align=”left” asin=”B000CIADLG” locale=”us” height=”110″ src=”http://ecx.images-amazon.com/images/I/517Zx0IrHIL._SL110_.jpg” width=”110″]Solar panels are becoming more common in commercial and domestic real estate. Homeowners recognize the cost-benefit of installing a set of panels on the south-facing side of their houses, and management understands how cheap it is to offset a building’s energy use with solar panels. These are all piecemeal applications of renewable energy sources, though, with it being left to an individual or a small group to make the decision. What would happen if whole countries received their energy from solar power only?

The Japanese engineering corporation Shimizu is working on an ambitious plan to build a belt of solar panels around the Moon’s equator. Called the Luna Ring, the project could supply Earth with 13,000 Terawatts of solar energy. As it is, the Sun deliveries more energy than we consume on Earth, and a large amount of this solar energy is unharnessed or even stored for future use. In different terms, the amount of energy the Luna Ring will deliver to Earth is 10 times the energy of the most powerful laser and 150 times the rate of heat energy released from a hurricane. 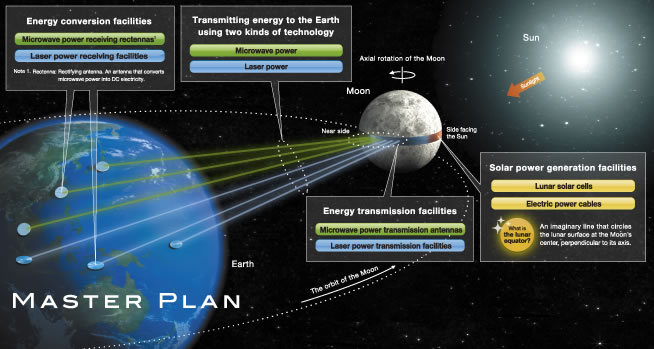 The Luna Ring would span the 6800 miles of the Moon’s equator, and it would absorb energy from the Solar-facing side that would then be transported to the Moon’s near-side facing Earth and eventually beamed to terrestrial energy receiving facilities via microwave and laser power. The energy receptors on Earth would then immediately convert the solar energy into DC power that could be used for commercial and domestic power.

Shimizu also plans to use Lunar resources to build the solar belt. The corporation explains that Lunar soil can be used to manufacture solar cells, ceramics, glass, concrete, and water, all of which may be needed to complete the project. And there would be no need for risky, long-term human missions to the Lunar surface. Construction and maintenance would be completed by autonomous or remote-controlled robots.

The Earth receives 174 petawatts of Solar Energy, some of which is reflected into space, the remainder of which is absorbed by different terrestrial features like clouds, oceans, and land. There is some estimate that the amount of Solar energy the Earth recieves annually is twice as much as the energy used by people. Because Shimizu’s Luna Ring project would harness Solar energy much more than we currently do, there is opportunity to solve the energy crisis indefinitely. While the energy from the Luna Ring could be used for current energy consumption, there is such an abundance that energy could be stored in batteries for millenia of use.

Memories With MayaDrawBraille Future Smartphone For The Blind