Soylent: The Food of the Future (Part 3)

Read Part One and Part Two of “Soylent: The Food of the Future”

Day 18: Back from New York, and it has been glorious to be on Soylent. Of course, I took what vitamins I could to NYC, including mastic gum and [easyazon-link asin=”B007N9217Q” locale=”us”]nootropics[/easyazon-link], and all of the food that I ate there was enjoyed immensely. I hadn’t realized how much I had missed food until I started eating it again. However, within two days I was already craving Soylent again, as nothing that I ate seemed to give me quite the same energy boost, though the nootropics did maintain my clarity.

[easyazon-image align=”left” asin=”B003BL6PMM” locale=”us” height=”150″ src=”http://ecx.images-amazon.com/images/I/21vTQzmK9IL._SL160_.jpg” width=”100″]I enjoyed a cupful of the thick substance this morning, and starting thinking about little ways that I could improve the recipe even further. I have been using vanilla flavored protein powder, and a liquid vitamin that is citrus flavored (this is very important. The unflavored liquid multi-vitamins are actually quite appalling, and could probably ruin the taste of Soylent). They pair fairly well, but I wanted to try other flavors, so I went and purchased some protein powder in chocolate flavor. I also chose to water my batches down quite a bit more than previously, and drink them four times a day instead of two. This all helped immensely – the mixture now reminds me of a subtle butterscotch, and when blended with ice water, it has a smoothie-like texture. Delicious – almost good enough to pair with a burger. Almost. 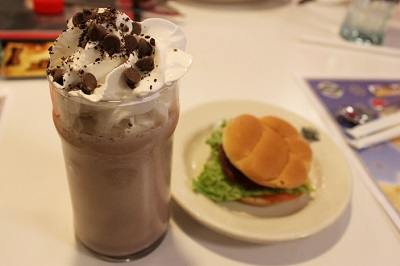 Day 21: I was reading other individual’s accounts of experimenting with Soylent, and one suggested that it could be baked in the oven at 375 degrees for 15 minutes to create a sort of bread. I tried this, and I have to report that it was disgusting. The ingredients were solidified into a mealy, mushy texture, and somehow it managed to gain a severely bitter aftertaste. Perhaps there are other ways of doing this, but in the meantime, I will stick to the blended version.

[easyazon-image align=”left” asin=”B000FV1K26″ locale=”us” height=”110″ src=”http://ecx.images-amazon.com/images/I/31PPjIEBr%2BL._SL160_.jpg” width=”160″]Day 22: I’ve been thinking about blood tests lately. I haven’t gotten any until now, because outside of the brief dizzy spell while running (which turned out to be dehydration) I haven’t felt anything but wonderful in all aspects of my mental and physical being. The way I see it, we are already fairly reckless when it comes to our diets and vitamins. Generally, we eat with only a vague inclination as to the amounts of vitamins and nutrients that are going into our bodies. Granted, directly using Soylent ingredients is different in the fact that you are using the pure raw materials, so chances of an ingredient overdose could be higher.

Yet, I believe if one is extremely careful and thorough in their research and measuring with Soylent, it is actually far more responsible than eating normal food based on vague inclinations of nutrient content. These food consumption practices tend to be coupled with intakes of vitamins that are generally dosed and consumed with the same degree of abandon. I am generally speaking here of course, and this could be an utterly foolish point of view, but to me it makes sense. Therefore, I chose to forgo a blood test unless I gain some severely negative symptoms, at my own risk. I would not advise this for anyone else, though. Just because I have declined this option does not mean that it is wise for others to do the same, and in some cases, I believe it could be dangerous.

Day 23: Still going well. I missed food quite a bit today, and treated myself to a nice dinner and a beer. With h. pylori, my body has never processed alcohol well, so I only brave it once in a great while as a special treat. However, the beer I consumed tonight went down smooth as silk, and my stomach was not bothered by it in the least. I am elated, and in some ways, feel like I’ve gotten my life back again.

Evacuated Tube Transport By ET3: LA to NY in 45 MinutesSoylent: The Food of the Future (Part 2)