RssInstagramTumblrPinterestYouTubeGoogle+TwitterFacebook
Systems theorist and inventor Buckminster Fuller once claimed that humanity is not a noun (it is not a ‘thing’), but is rather a verb – an evolutionary being that is in a constant state of motion. Throughout history our species have devised different ways of overcoming obstacles and limitations, whether they be geographical or biological, using either scientific discovery or technological innovation. The ultimate goal, however – as I would argue – has always been to increase our lifespan.

For biohacker Rich Lee (also referred to as the “space gangster”), he doesn’t necessarily see a difference between the technological aspirations of overcoming our biological limitations and increasing our overall lifespan. Unfortunately, while there are a number of biohacks available today that could potentially save peoples’ lives – from magnetic implants to biothermal RFID chips – there remains a limitation insofar that biohacking’s potential impact on our general health is still quite miniscule. That is, until the biohacking movement pirates its way towards achieving open-source immortality. 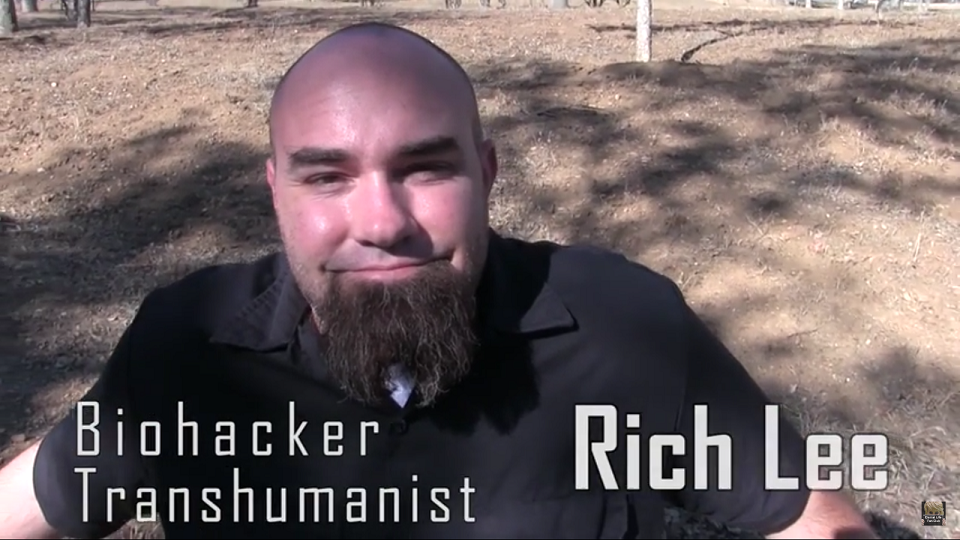 Below is a video interview that was conducted by Roen Horn, who is the founder of the Eternal Life Fan Club, where he discussed with Rich Lee both the present and future of biohacking and the overall impact it will have on us as we continue pursuing increased longevity. Biohacking is essentially an umbrella term for the various methods of which people can attempt to hack their own biology, whether they’re using cybernetics or genome editing tools. The interview was conducted at this year’s GrindFest in Tehachapi, California – a biohacking festival founded by biohacker Jeffery Tibbetts.

Hearing Rich Lee speak about the history, present day, and future of biohacking really makes me think of one of my favorite characters in the sci-fi space opera series Battlestar Galactica named John Cavil. A character, I’d argue, that would most certainly resonate well with most known biohackers, transhumanists, and longevity advocates. Why? Well, take a look for yourself:

“I don’t want to be human! I want to see gamma rays. I want to hear x-rays. And I want to smell dark matter. Do you see the absurdity of what I am? I can’t even express these things properly because I have to conceptualize complex ideas in this stupid, limiting spoken language. But I know I want to reach out with something other than these prehensile paws and feel the solar wind of a supernova flowing over me. I’m a machine, and I could know much more. I could experience so much more, but I’m trapped in this absurd body!”

Which then raises the question: what does the future of biohacking entail for us? Are we talking about a future of Cyborgs? Or perhaps a post-human future where the human biological substrate no longer exists and is instead replaced by a continuum of various different non-biological substrates, of which we cannot even currently fathom? Whichever future we do create under the guidance of advanced biohacking, one can be relatively certain that indefinite life extension will arise in tandem and a new age for humanity will begin!