RssInstagramTumblrPinterestYouTubeGoogle+TwitterFacebook
Developing holographic lenses, while increasingly important in our ever-growing technological age, has always been quite the struggle. It required a lot of time, labor, and money to ensure overall success. When you compare it to how the fictional universe of Star Trek accommodated holography in their everyday society, one would assume that we’re decades, if not centuries, away from reaching such a future. That is, until now. 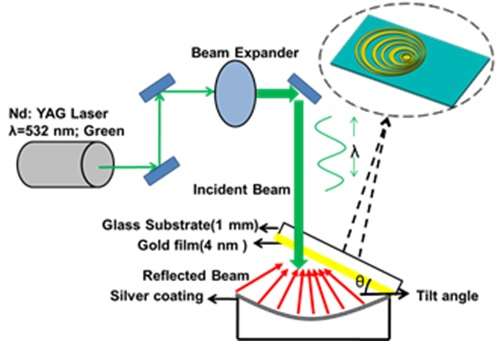 “While current holographic lens fabrication methods are often expensive, time-consuming, and labor-intensive, the new printing method can produce a lens in just a few seconds using only a single step.”

Published in the recent issue of ACS Nano, researchers have developed a whole new method of printing holographic lenses that cuts the original labor-intense and time-consuming process down to a single step in mere seconds. Using a nanosecond laser pulse to create interference patterns on a transparent substrate, the laser is able to reflect off the substrate’s concave mirror back onto itself. As a result, the noted interference occurs as the laser beam comes into contact with itself, moving in two opposite directions, resulting in the interference pattern “printing” onto another substrate between the two beams.

In effect, optical information is then stored as a holographic lens, which consist of hundreds of nanoscale circular zones focusing on light. The flat, ultra-thin lens, as shown in the provided image above, is made of a 4-nm-thick layer of gold, with an approximate diameter of a single inch. Given its quick printing process, mass production is achieved in mere minutes.

During the second decade of the 21st century, holography has found itself several different applications, from data storage, to biosensors, to security. Prominently, we’ve witnessed the use of holography in entertainment applications, such as holographic computing. Most importantly, however, holographic lenses have been used to develop very efficient telescopes in space. This new printing method will surely unleash a new holography revolution for astronauts on board the International Space Station, making our Star Trek future all the more clear in sight.

The Future This Week: SpaceX, Bionics, and the Immortality BusDARPA’s Tiny Guardians in the Form of Microchips