Subway-Generated Heat Could Power Your Home

[easyazon-image align=”left” asin=”1568983557″ locale=”us” height=”75″ src=”http://ecx.images-amazon.com/images/I/61zkmYzNAWL._SL75_.jpg” width=”74″]Subway-generated heat sets a great precedence for future public transit developments and energy efficiency at home. The sweltering heat that accompanies the comings and goings of London’s Northern Line will be put to use by powering up to 500 homes in the Islington borough. The power plant, Bunhill Heat and Power Center, will oversee the redirection, and already uses “secondary heat sources” to warm 700 homes in the area. This will be the first time the Underground has assisted the power plant.

The plan is part of many in development by the European Union’s CELSIUS (Combined Efficient Large Scale Integrated Urban Systems) project, which aims to make use of European cities’ waste energy. London’s subway plan is jointly funded by $4.4 million from Islington Council and $1.6 million from the EU. Mayor Boris Johnson vowed to supply 25% of the city’s energy through this and other decentralized sources by the year 2025. 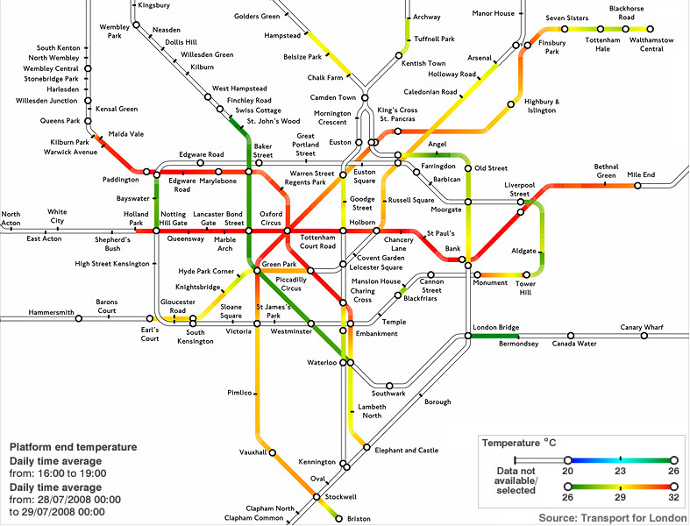 Above: A map of the London Underground’s heat output.

The CELSIUS project was founded in 2012, and is set to expand across 50 cities by 2016. The blueprints for this project came from experts based in five major European cities that share complimentary energy baseline positions: Cologne, Germany; Genoa, Italy; London, England; Gothenburg, Sweden; and Rotterdam, Netherlands. According to reports, smart district heating and cooling could almost 85% of a city’s heat demand from secondary energy sources today. Not using these secondary sources means that the energy would be lost in the atmosphere and contribute to the ever-increasing ozone layer damage.

[easyazon-image align=”left” asin=”0393057976″ locale=”us” height=”75″ src=”http://ecx.images-amazon.com/images/I/51q190EgzyL._SL75_.jpg” width=”62″]This concept will not only inspire other nations to seek new ways to conserve energy, it will also foster smarter city development in the future. Should this project be embraced by more cities and nation/state unions, it may spark a public transportation renaissance that doubles as a major energy source adopted by cities worldwide. It can also inspire up and coming metropolis areas and undeveloped towns to base their infrastructure on this established symbiotic relationship. When conventional public transportation is phased out in favor of cleaner, refined options such as high-speed light rails, the converted energies used would be able to supply larger-scale grids and make a more pronounced, positive impact on the environment.