SXSW (South-by-Southwest) is Austin’s annual festival of panels, expos and keynote presentations oriented around Music, Film and Interactive technology. This year promises some very exciting debuts and startups, which will have a profound impact on how society is shaped and the new directions that technology is currently pushing us towards. Here are some highlights of the day.

The first panel of the morning was Computing the Future: MIT Scientists Tell All, hosted by Andrew Lo, Daniela Rus, Russ Tendrake, and Tim Berners-Lee. The vision of the future comes from what we want it to be. Berners-Lee characterized the web ‘we’ desire as having expression, no censorship, full access, neutrality, innovation and privacy. To get here, the panel advocates for programming to be taught in high school curriculum. “We need everyone to understand programming in order to understand the future of tech,” emphasized Berners-Lee. 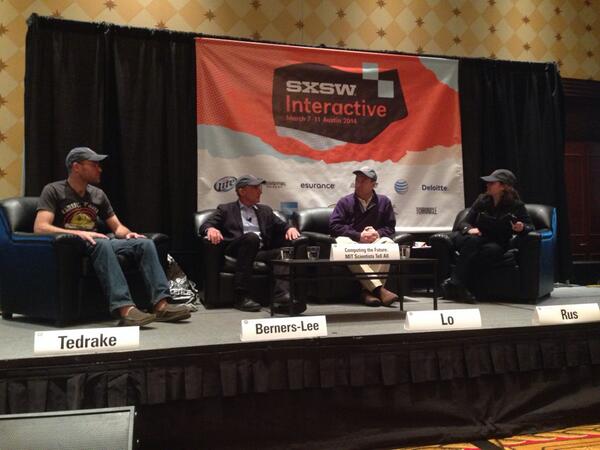 With the advent of Cloud technology, digital spaces are more advanced than ever, yet robotics still have a way to go in order to catch up. “What unites ballerinas and toddlers?” the panel asked. “Both are the two types of people robots struggle to move like.” Currently, robots are too fragile, too expensive, require too much energy, and need more legislation to perform at their most efficient in society. In spite of our current limitations with robotics, there is no better time to get involved with improving them. Due to Google buying 8 robotic companies in 6 months, and the DARPA challenge, Tendrake says “in the last 5 years robotics have just become awesome!”

Is Bitcoin the Future of Money? was the next panel and question posed by Coinbase founder Fred Ehrsam and Wall Street Journal’s Rolfe Winkler. One of the first people to accept Bitcoins was Wikipedia founder Jimmy Wales. Being interviewed by Winkler, Ehrsam made a case for Bitcoin’s acceptance as currency of the Internet. “The original sin of the Internet is that there is no native pay system,” said Ehrsam. Bitcoin functions as programmable money; an example used to illustrate this is the ability of a parent to authorize a child’s transactions.

Presently, Bitcoin is commonly misunderstood, Ehrsam says. “One of the common mistakes made by media is thinking of it as currency. It’s an open network for currency that lets you transfer money without third party verification.” An advantage Bitcoin has over traditional paying services is the ability to transfer money abroad instantaneously without having to pay expensive handling fees.

In its early stages, Bitcoin has already generated considerable controversy due to the MtGox exchange losing 500M worth of Bitcoins. “There’s a bit of natural selection going on,” Ehrsam explained. “MtGox was run by one programmer. Some of the gen one Bitcoin companies are failing due to security issues and there are a number of differences now.” These differences include more senior leadership, regulation, and checks and balances through third party auditing firms. Keeping Bitcoins safe relies on ‘cold storage,’ meaning that Bitcoins are to be stored offline to be secure.

According to Ehrsam, 2014 will be the year where major retailers such as Walmart and Target will accept Bitcoin. Reddit and Wikipedia are already on board, and after some more changes and security assurances, more will take the reins.

What Does the Future Sound Like? was a panel hosted by Geir Skaaden of DTS Inc, Robeto Baibich of Awful Code, Scott Persson of Sound Lounge, and Veronique Larcher of Sennheiser. The main idea is to build upon conventional surround sound technology and allow for users to customize it to their preference in any manner they choose. In the latest ProTool model, for instance,  you can identify a single point anywhere in a circle, and render it to playback from the source you pick. “As you build mobile networks, 70% of bandwidth is used for audio/video,” said Baibich. Because more focus is placed on audio/video in phones, so too, then, should the technology elevate itself to fully enhance the mobile and listening experience. 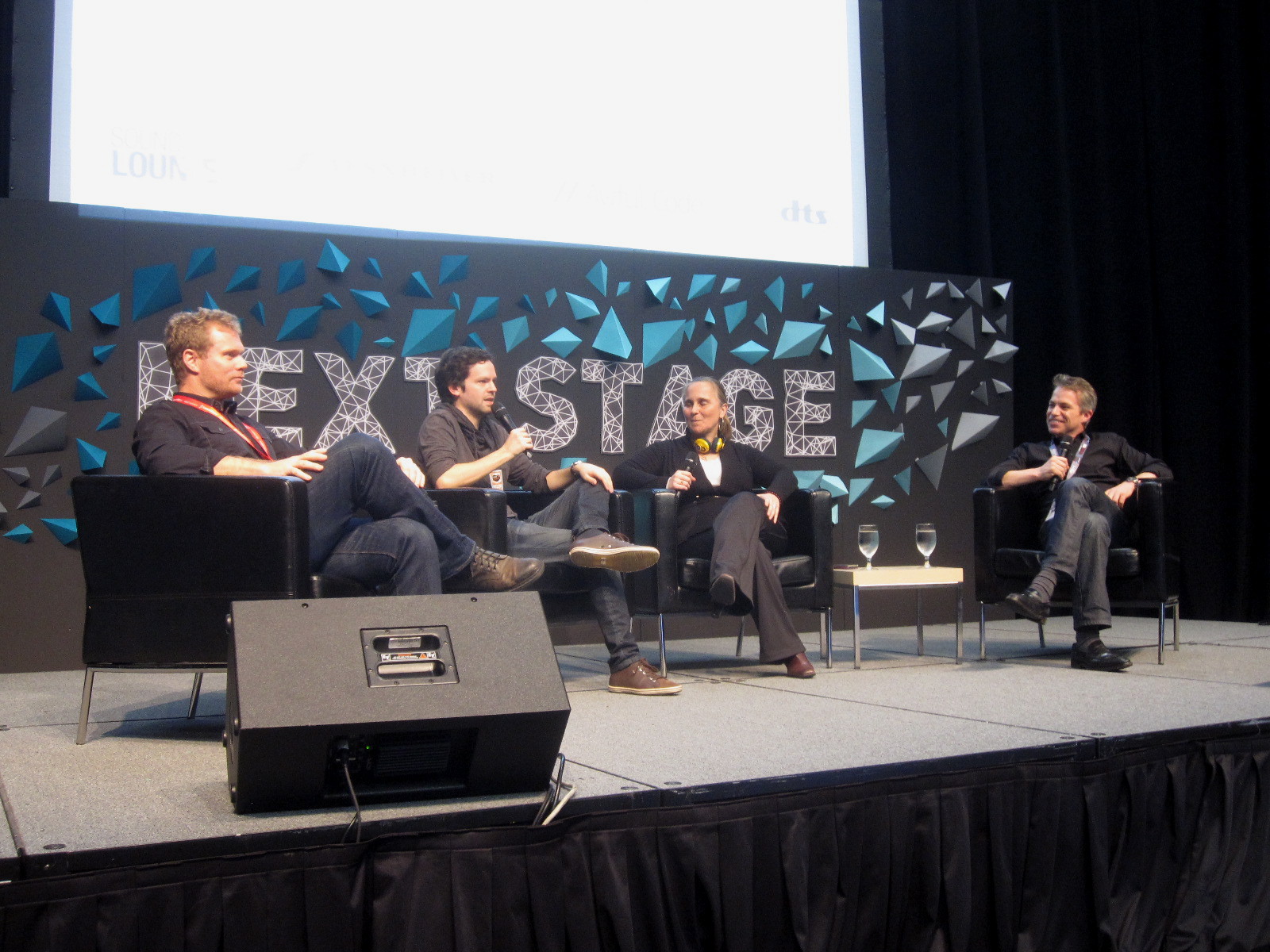 The challenge for advancing audio tech is perfecting audio-based individuality. “One of the limitations we have is because of how sound waves are refracting along your head, and we all don’t have the same ones,” Skaaden said.”What you’re going to start seeing is headphones that can scan your head to adjust to its contours.” This kind of 3D audio modeling would also do well in customer service by reducing damage to ears for call center workers and phone users in general.

The Giant Has Awakened: Building Brands in Brazil was the first of today’s Future15 miniseries in the field of global impact and policy, hosted by Will Palley of JWT. Currently, Brazil is poised to become the next global hub in fields such as energy, technology and culture. Palley made a compelling case for investing and keeping an eye on Brazil. 93% of Brazilians surveyed said they’re overall happy citizens.

As a result, Brazil is currently ranked the #1 happiest place in the world. In addition, 62% or Brazilians are under the age of 29, and inherent to this youth is a value of social cohesion and collectivism. While this Future15 panel was primarily focused on the prospect of brand advertising, Brazilian tech startups have had a major presence at this year’s SXSW convention, which is indicative of the upcoming Brazilian global renaissance. Brazil is set to be the sixth largest economy by 2030.

Gov2.0: Enhancing Citizen-Politician Interactions was conducted by Albert Nichols of IBM, and addressed how the relationship between politicians and citizens can and needs to be enhanced in the future. Politicians exist as they want to be seen for the most part, utilize very strong PR vehicles, and are able to permeate into citizen spaces whether they like it or not, described Nichols. Now with social media, people are very active and use it increasingly to interact with politicians. This is a major change from the traditional, antiquated method of writing to your congressman. Access to one  is more direct than ever before, and citizens are showing that they can and will uprise if they don’t like politicians.

Nichols characterized the needs of civilians into four components: personal survival, rights, opportunity, and progress. For politicians, the needs are: re-election, impact, compensation, and approval. These different types of needs can be satisfied by working together other online and offline. The future of this intrapersonal relationship will grow from the direct access and hyper-awareness citizens have of their politicians and their PR machines. As a result, we are a more empowered collective due to technology.

Like the Trees: Biomimetic Architecture in FranceSXSW Day 3 From Serious Wonder