Swimming like spermatozoa, researchers and engineers at the University of Illinois breathed life into a synthetic bio-bot that self-propels through the contraction of cultured heart cells known as cardiomyocytes.

Modeled after single-celled organisms, these bio-bots consist of a long flagella-like tail made up of flexible polymer, alongside a short head by its end that is attached with cardiomyocytes near its junction. Of which are self-aligned with synchronized contractions, sending waves down its tail to help it propel forward.

While modeled after organisms like spermatozoa, the engineered bio-bot’s length is up to 2 mm (millimeters), in contrast from actual sperm cells which are 55 μm (microns). In other words, around 36 sperm cells would be able to hitch a ride on this bio-mechanical beast – albeit one that is still very small. Speed wise, the single tailed bio-bot was able to propel itself anywhere from 5–10 μm s−1 . 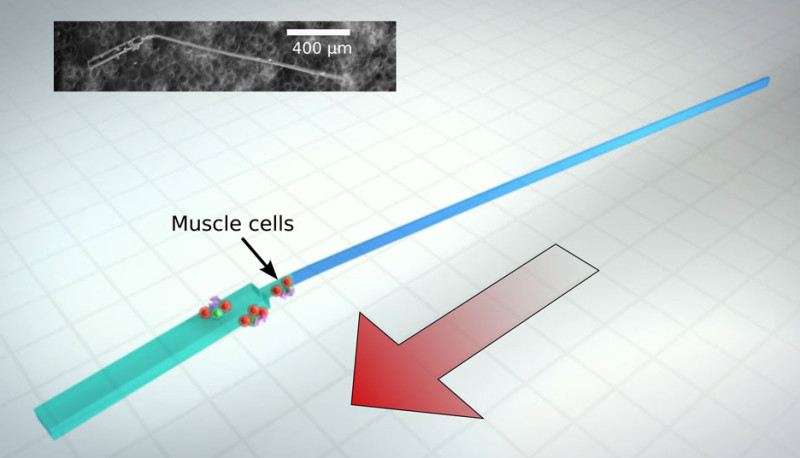 Lead team engineer Taher Saif, the University of Illinois Gutgsell Professor of mechanical science and engineering, noted the significance of such an engineering feat, hoping it will eventually result in several different structures that’ll carry “stem cells that would differentiate into smart structures to deliver drugs, perform minimally invasive surgery or target cancer.”

Despite unnecessary worries of supposed “grey goo” scenarios, these bio-bots are paving the way towards a near-future of medical nanotechnology. The benefits far outweigh any fear-mongering risks proposed by neo-Luddite opponents, anywhere from instant drug deliveries to locating newly developed cancer cells and destroying them on the spot without you ever knowing about it.

Commercially, these same nanobots, which would be much smaller than the bio-bots engineered today, would be able to keep 24/7 tabs of your entire organs system, constantly revitalizing and keeping you healthy. The implications of such a medical feat are enormous, resulting in the very real possibility of achieving indefinite life extension – in other words, the end of aging as we know it.