The architecture of modern skyscrapers tends toward grandiosity, but the proposed Infinity Tower in South Korea rethinks this trend. The design is impressive because it uses networks of cameras and LEDs to cloak the tower in a state of semi-invisibility. By day, the tower will reflect the surrounding landscape and hide its actual form. By night, the tower will reveal itself.

The skyscraper, designed by GDS Architects, will employ a series of High-Definition cameras on certain sides of the building that will record the scenery visible to the side opposite the one you face. Then using LED screens, the images will be displayed as if you were looking through the building to the scenery that would normally be blocked. The tower isn’t invisible altogether but only to certain sides and vantage points. There is some element to the design that will make it constantly visible to pilots and birds. 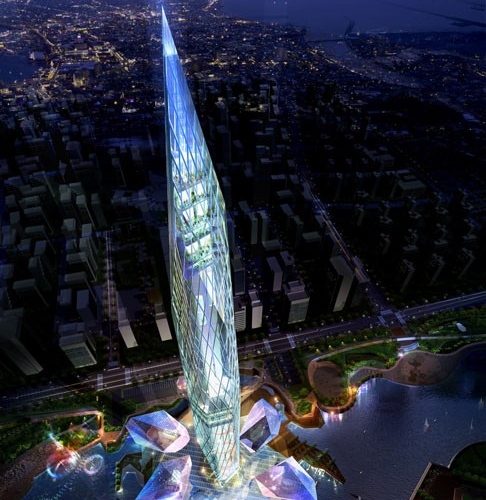 Inspiration for the Infinity Tower came from a quotation in the Tao Te Ching that one of the project’s architects said reinforced the core philosophy of the tower’s design: respect for others. “We look at it, and do not see it; it is invisible. We listen to it, and do not hear it; it is inaudible. We touch it, and do not feel it; it is intangible. These three elude our inquiries, and hence merge into one. Not by its rising, is it bright, nor by its sinking, is it dark. Infinite and eternal, it cannot be defined. It returns to nothingness. This is the form of the formless, being in non-being. It is nebulous and elusive.”

If the philosophy behind the Infinity Tower is one of deference and respect, then this represents a change in design attitudes made possible by technology. The tower reflects its surroundings rather than itself because of the High Definition and LED technology, a decision that draws attention to everything else but the tower, a humble move for modern architecture. Many modern buildings seem to push higher and more dramatically above the cities that support them, as if they were indifferent to their surroundings. But the Infinity Tower carefully defers to the city that land on which its built.