RssInstagramTumblrPinterestYouTubeGoogle+TwitterFacebook
Let’s admit it: Segway-based transportation is becoming increasingly popular as each year passes by. From the original Segway PT in 2001 to what are being referred to as “hoverboards” today, Segway transportation is here to stay. Taking advantage of this fact, smart transportation company Ninebot has developed an entire assortment of top-of-the-line self-balancing Segway vehicles.

During this year’s Consumer Electronics Show (CES), Ninebot became one of its many stars. As an event known for its introduction to advanced technologies of tomorrow, the Ninebot Segway certainly stood out in the crowd. And for a good reason too!

“At Ninebot our slogan is ‘Think Differently and Innovate Sustainably’, but it’s more than just a saying. We believe that Ninebot will push the self-balancing vehicle business to new heights. Not only to change the way people live, but to contribute to diversity in the industry of technology. We look forward to a new era in which Ninebot Inc. achieves sustainable innovation for all mankind.” 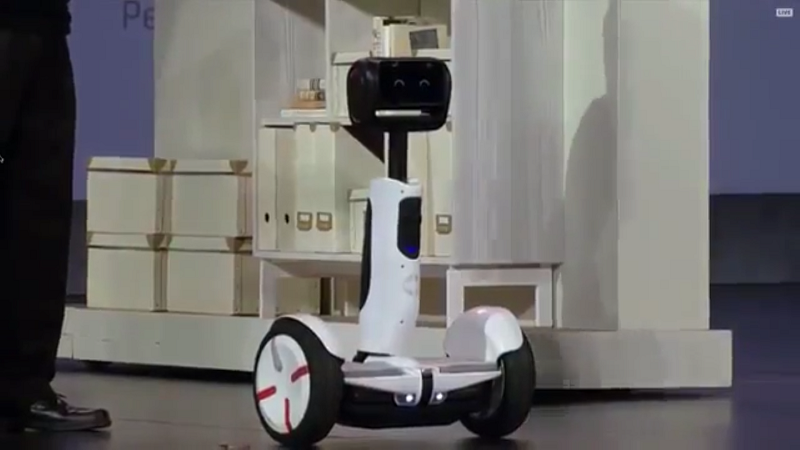 To differentiate itself from the rest of the company, Ninebot wow’d the crowd at CES 2016 by introducing them to their latest product – the Ninebot Segway Robot! Although it takes on a similar physique as that of their Ninebot Mini, firstly the robot head is definitely a cool (and cute) new feature. Secondly, the robot is equipped with RealSense technology developed by Intel, allowing the robot to not only see its surrounding environment, but subsequently recognize what it’s looking at. Unlike the Ninebot Mini, the robot will be able to use RealSense to actually track and follow its owner without relying on a smartphone.

For those interested in getting one, the Ninebot Segway Robot will be available later this year.

The Ninebot Segway Robot is not only a fascinating look at the future of Segway-based transportation, it subsequently acts as a clever segue (ha! get it?) into the very near future of personal advanced robotics. Robotic transportation certainly isn’t a new thing anymore now that we’ve been exposed to all of the news lately of mainstream automotive companies dipping their feet into the pool of automation. But what the new Ninebot Segway does is actually deliver robotic transportation with a strong emphasis on *robot*.

Robots will be in all shapes and sizes in our coming future, swimming in your bloodstream and flying you to the Moon. They’ll liberate us from the workforce and they’ll liberate us from the unfortunate confinements of biological aging. Some will be as smart as your cellphone, while others will be more intelligent than the average human being. They’re here to stay. The future is now!

Blade Runner Philosophy: “What seems to be the problem? Death.”My View On Life and Metaphilosophy