RssInstagramTumblrPinterestYouTubeGoogle+TwitterFacebook
The primaries for this year’s U.S. presidential election is almost over and we’ll soon be entering the general election stage. On both sides of the mainstream political spectrum there has been a huge shift away from establishment-based politics, with Bernie Sanders pushing a Democratic Socialist platform under the Democratic Party and Donald Trump pushing an extreme right-wing nationalist platform (some might even call it “fascist”) under the Republican Party.

And yet, as we soon enter the general election, it would appear we’ll be witnessing an electoral battle between Trump and Hillary Clinton – two candidates whom the majority of this country dislike and likely won’t even vote for. As a result, we’ve witnessed a huge growth in Google searches of third party candidates, according to a new iQuanti survey recently released. The top four searched are: John McAfee of the Libertarian Party; Gary Johnson also of the Libertarian Party; Jill Stein of the Green Party; and Zoltan Istvan of the Transhumanist Party. 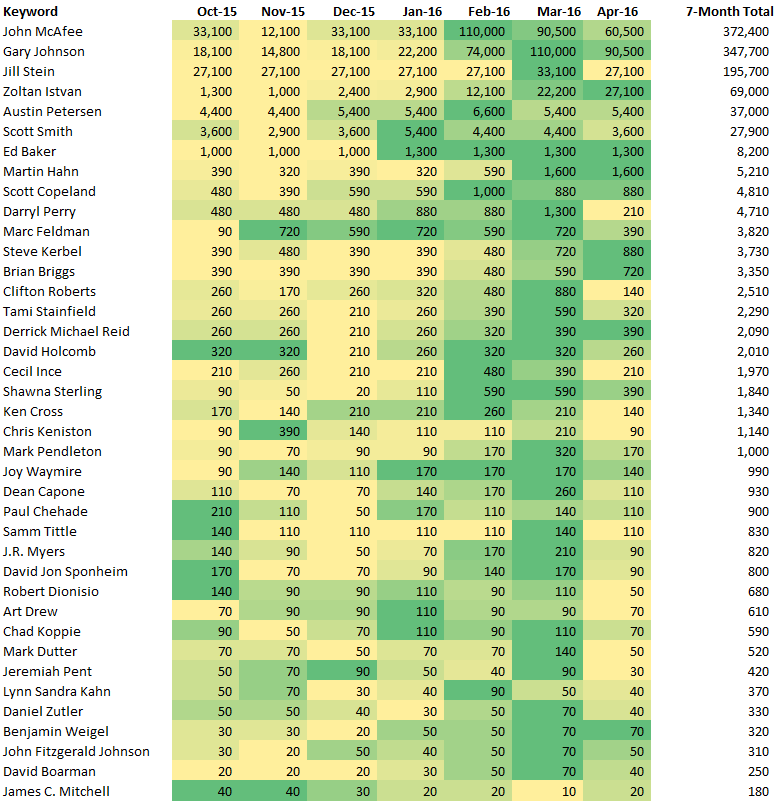 We’ve since spoken to Zoltan Istvan about this rise in popularity and have provided a transcript of the conversation below:

As we both know, a new iQuanti graph has come out which has listed you as the fourth most searched third party candidate for these upcoming elections in the United States, increasing nearly 2100% since the start of your campaign. Why do you think this is?

What I think a lot of people don’t know is that I’ve been at this presidential campaign fulltime for 18 months now, including the 4 months on the Immortality Bus (which generated a massive amount of attention). I’ve had a long time to build a base of supporters and also to present a cohesive centric transhumanist platform. I must say it’s all starting to work and come together. 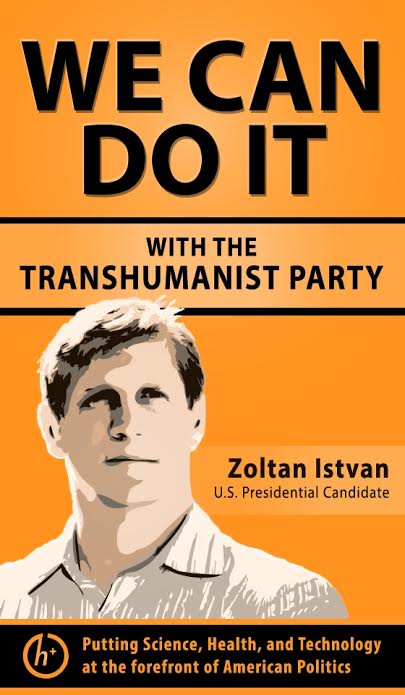 Zoltan Istvan of the Transhumanist Party

Correct me if I’m wrong, but on social media, I believe you stated that in the coming weeks you’ll likely become the #1 third party candidate, possibly outpacing others like Jill Stein and Gary Johnson. How’d you reach that conclusion?

I believe I said I’d become the leading independent candidate, not 3rd party candidate. There’s a slight difference. After the Libertarian and Green Parties pick their nominee, I’ll move up the scale as the leading independent left that is still able to control my campaign direction. Other major 3rd party candidates, once chosen, are obligated to their ballots and parties, but I retain the freedom to run as I wish (and to give my votes away if I wish) since the Transhumanist Party is not yet a FEC recognized party, nor is it a membership party, nor are there rules that chain me down.

If you were to become the #1 independent candidate, how do you think this will translate into votes? And with that, how do you believe you’ll be able to shape the upcoming general election, which could very well be between Hillary Clinton and Donald Trump?

I think being the leading independent candidate will be quite newsworthy. The iQuanti survey has already doubled the interest in my campaign. So being known as the country’s leading independent candidate will generate even more attention—especially for transhumanism. This will be even more so after Bernie Sanders loses to Clinton and is no longer a part of the election. I suspect then I could pick up a bunch of young people looking for a cool new candidate.

The key here is the battle ground states. If the election between Clinton and Trump is close, within a million votes, then the vote for me—the longevity vote—could be important in the states I do best in: Florida, New York, Texas, and California. Florida and California might especially be important states for me, since they have so many electoral votes at stake. If I can convince a major candidate that I can help them win by throwing my votes their way near the end, I could end up negotiating a deal for an administration position where I could implement nationwide pro-longevity and transhumanism policy. That would be a winning situation for me. And a step forward should I run for the presidency again later in life, too.

Of course, I should mention, it’s VP season right now for the major candidates, and one can always hope. To reiterate what I’ve said before in other interviews, I serve the cause of longevity and transhumanism, and I would gladly serve under someone who would support that cause in a real way that could make human’s lives much longer.

Lastly, what are your hopes for the future of this country under the Transhumanist Party and its platform, and what role would you like to be involved in for said future?

Everyone, especially in our community, has made a really big deal—both good and bad—about the Transhumanist Party and its platform. It’s been really surprising. I guess they don’t know thousands of parties are created every year and fail (parties can legally be created by two people agreeing to it in a matter of a few exchanged sentences—that’s the law—and who cares what the law is anyway; political parties are founded because they disagree with government who makes the laws).

Regarding platforms—it’s the same as parties: thousands of them are created and fail, or change, or get modified every year. The key isn’t the platform or the party, except for a select few (in America’s case, the Dems and GOP, maybe the Libertarians and Greens). The key are the people behind it. Do they preserve through the trolls and naysayers and hurdles? If they’re persistent, they do and succeed. In my case, I’m not sure yet about the Transhumanist Party or what will happen to it. It’s a great vehicle for what I’m doing now, but the better vehicle is myself—and the platform I believe in. The same thing with Bernie Sanders. He could leave the Democrats tomorrow and continue his Democratic Socialism on his own. His platform is his charisma and his 40 years of service to the cause—not the Democratic Party. Mine is my service to trying to make everyone on this planet live far longer and my ability to get the message out. And that’s what I plan on continuing to do in the future.

People are mired into thinking this is a game of political parties. It’s not. It’s a game of personalities and the ability of those personalities to succeed. Just look at what Trump did, for better or worse, to the GOP in the last 6 months.