RssInstagramTumblrPinterestYouTubeGoogle+TwitterFacebook
Yesterday, soon after publishing the article “NASA Aims for Mars with World’s Most Powerful Rocket,” I noticed a small, but noticeably frequent, reaction that went as followed: Why are we spending so much money to go to space, let alone other planets, when Earth still has its own problems needing to be dealt with first? This is a common view held by many people, to which I don’t blame them for having.

Yes, there are still many problems here on Earth that, quite frankly, we’re not spending a lot of time, effort, or capital to help address. But then is State funding of NASA’s budget really to blame, or even adding damage to an already beaten up planet? Astrophysicist and science communicator Neil deGrasse Tyson would beg to differ:

To add more weight in Neil deGrasse Tyson’s argument, he goes on to explain how doubling NASA’s budget would fix the U.S. economy tremendously, because a healthy economy thrives on innovation! This is equally true to the world economy if our entire species became a spacefaring species – if we were to dedicate our time and efforts on exploring space. Other than the new types of jobs and new technologies that would result in exploring space, vast amounts of wealth remain unplucked outside of Earth’s orbit. 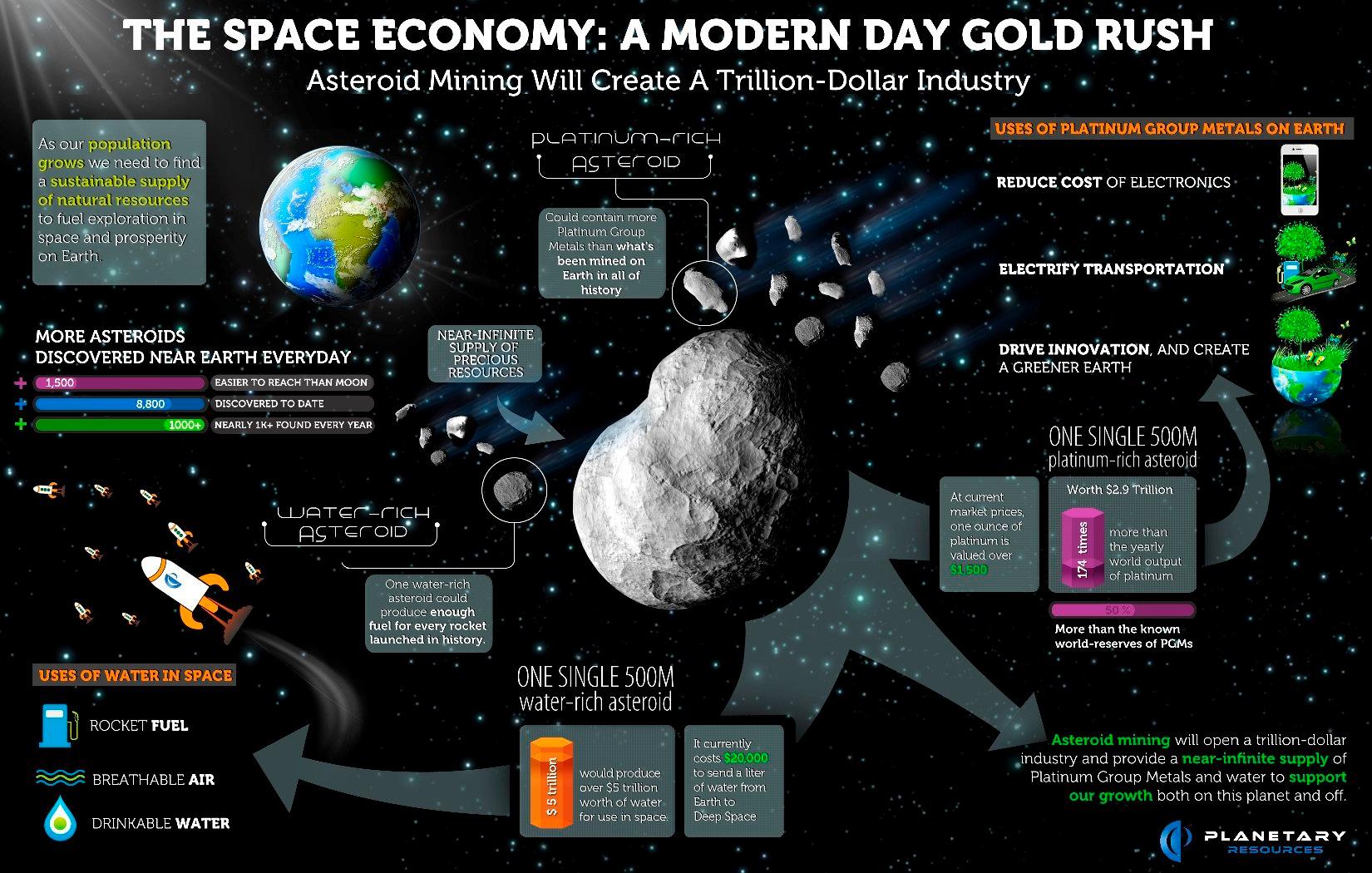 A sub-group space race is on the move – asteroid mining! You may ask what the point is of reaching and mining asteroids. As the above image points out, each asteroid has potentially abundant amounts of what is known as Platinum Group Metals (PGM), of which can be used for several different things – transportation, green energy production, cost reduction in electronics, etc. A single ounce of PGM is estimated to attain a value of $1,500+! In short, the simple act of mining asteroids would become a trillion dollar industry! Talk about an economy of wealth!

But what about rocket fuel? Surely we’d be spending a lot of that money in maintaining the industry itself. Asteroids would be the biggest contributor in rocket fuel as well! Liquid propellants come to a great advantage for rocket fuel due to its oxidizers – liquid oxygen, nitrogen tetroxide, and hydrogen peroxide. Alongside platinum, asteroids attain abundant amounts of the elements hydrogen and oxygen. With this, a single water-rich asteroid could potentially provide enough fuel for every single rocket we ever launched on Earth in history, and thus would become a major wealth driver in space exploration!

“[O]n asteroids, abundant quantities of hydrogen and oxygen can be used to create rocket fuel, the same stuff used by the Space Shuttle. This allows companies like Vivisat fuel spacetugs that will be used to keep satellites in their Geostationary slots, or fuel up your spacecraft before zooming off to Mars. The possibilities are endless!” – Planetary Resources

Indeed, the water that would be extracted from asteroids would also be used for several other things, such as hydration for our astronauts, breathable air, hydroponics used to grow vegetables, and can be used as a natural radiation shield – a necessary resource given the real threat of radiation exposure in space. The amount of wealth that would be accumulated from a single asteroid could potentially reach up to $5 trillion!

So how many asteroids are out there? According to Universe Today, “if you only consider those larger than 100 meters orbiting within the inner Solar System, there’s over 150 million.” This isn’t including the smaller asteroids, nor the amount of asteroids further away. Let’s add that up: $5 trillion x (+/-)150 million = A FREAKIN’ LOT! Imagine even a small percentage of all that accumulated wealth being used to help maintain a healthy Earth – energy, housing, food production, clothing, etc. etc. By not going to space would be one of the most devastating acts to our economy ever!

It’s hard to imagine that we’re now seriously discussing near-future plans to mine asteroids. For me, this was pure science-fiction when I was growing up. The idea of reaching Mars, colonizing it, and using nearby asteroids to help fuel a space economy was never in my mind as something to occur in my lifetime – and I’m only in my 20’s! And yet, here we are. This is our reality, and the future (say 10-30 years from now) is beyond comprehensible!

Becoming a spacefaring species will not only help protect our original home, Earth, but will provide many new homes as well on other planets, e.g. Mars. Despite plenty of unplucked wealth remaining on Earth, outside of the planet’s orbit there’s an unfathomable sea of wealth ready for us to discover. Remember, we are a wandering species with the innate drive to explore and discover new worlds. Exploring the cosmos is merely our next stepping stone.