There are so many allusions between sea and sky. With enough imagination, birds seem to swim and fish fly. So the name of Oscar Viñals’s “Sky Whale” concept plane shouldn’t make you laugh. But it will inspire awe.

Viñals designed the plane to use fiber optic cabling, self-healing skin, hybrid electric engines, and virtual reality windows. If it will ever see life as a commercial airline, the Sky Whale will make us hustle to buy a flight to anywhere.

With micro solar cells surrounding the plane, the Sky Whale will be able to create its own energy for in-flight use. The hybrid electric engines will continue to power the turbofan engines when the standard jet fuel is powered down.

The mass of the concept plane is literally like a whale. It is designed to seat 755 passengers on three different levels. The first class, top-floor seats will feature sky views out of the top of the plane.

Another interesting conceptual feature of the Sky Whale will be a separate space tourism “launcher.” The launcher is an additional vehicle attached to the Sky Whale that can eject outside of our atmosphere for travel in low Earth orbit.

With such ambitious plans for plane travel, what will the Sky Whale inspire in the future? 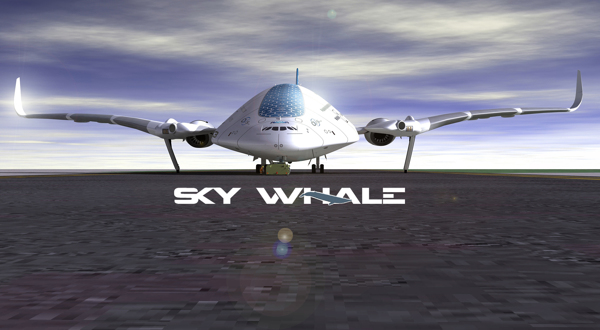