[easyazon-image align=”left” asin=”0847831906″ locale=”us” height=”160″ src=”http://ecx.images-amazon.com/images/I/51xLBp8INML._SL160_.jpg” width=”160″]Most of you likely to stumble on this article are aware of the death Oscar Niemeyer earlier this month. If you don’t know Niemeyer, he was one of the most brilliant minds of the modernist movement. You’ll probably recognize some of his buildings. They are graceful, naturally-inspired designs. With them he created a new identity for his home country of Brazil, and a new face for modernism. The man worked until he could not any longer; Friends say he would have designs brought into his hospital room so he could continue to weigh in. He never stopped creating because he was a true artist, and  brief tribute to why he’ll be remembered for generations to come.

He was a brilliant mind who embraced modernism. Quite plainly, he was an exceptional artist. Whether it was buildings, furniture or sneakers, he excelled at creating unique designs that never seemed to stray away from what he was creating. A Niemeyer chair was exactly that, nothing more nothing less, with one glance you see it is meant to cradle the human body. He designed a handsome line of sneakers for Converse too. They aren’t over-designed, they’re just great looking sneakers. Basically, he knew how to design a good office building, he knew how to design a good museum, and he knew why and how they should be different.

Perhaps more important than his embrace of modernism was his unwavering courage to not be stifled by it. The architecture world is fickle and competitive, and one can quickly fall out of favor if contemporaries disagree with a design. Niemeyer came up in a defining moment in design history.[easyazon-link asin=”0714833568″ locale=”us”]Modernism[/easyazon-link] was growing, its philosophy solid, and its vision undeniable. By the 1950’s, modernity was the future. He chose the modernist stance (long before the 1950’s), but did not accept it blindly. He quite literally bent modernism to fit his own philosophy by recognizing the new structural possibilities modern construction offered, and using them to create truly new and modern art. It took guts to set himself apart from the strict modernists who were running the show. As Norman Foster quotes, he rebuked the strictness of “form follows function” by saying that “when a form creates beauty it becomes functional and therefore fundamental in architecture.” His individualistic designs could have done him in, but they made him who he was. He continually allowed himself to be inspired and had the courage to showcase his inspiration. That is a lesson for all artists, whether you be an architect, musician, poet, or performer.

He gave Brazil a new identity. As Brazil moved forward with the election of future-minded president Juscelino Kubitschek, a new national identity was desired. Kubitscheck sought to fulfill a long-held government promise to build a new capitol in central Brazil to move power away from the dominant region in southern Brazil. The old capital, Rio de Janiero was characterized by colonial architecture, narrow streets, and a largely improvised cityscape.[easyazon-link asin=”0226349799″ locale=”us”]Brasilia[/easyazon-link], the new capital, would be just the opposite. Niemeyer was brought in as lead architect by the design contest winner and friend Lucio Costa. Niemeyer designed a number of fabulous modern buildings for the new city, including nearly all of the civic buildings. 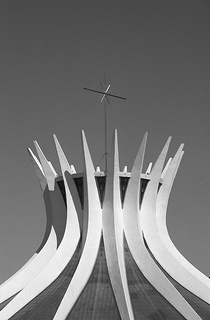 Niemeyer’s bold designs thrust Brazil into the international spotlight as the new 20th century country. The designs themselves were inherently Brazilian; inspired by the femine curves of the Brazilian women[easyazon-link asin=”3836530643″ locale=”us”]Niemeyer[/easyazon-link] (and everyone else, lets be real) admired on the beaches and streets of Brazil. Niemeyer would continue to design radically beautiful buildings around his country after Brasilia, and eventually be forced to do so abroad following a military coup de etat. His work is distinctly his and distinctly Brazilian. The man and his country have become synonymous.

He continues to influence the future. I doubt you’ll see any Niemeyer’s being torn down, so his legacy will remain in his own work, but his existing work is only part of it. Those buildings are static, but his continued influence is dynamic. Niemeyer’s has influenced countless architects since he began designing himself. Even [easyazon-link asin=”1616890681″ locale=”us”]Le Corbusier[/easyazon-link] was struck by the winding, natural designs of Niemeyer, and there wasn’t a more staunch proponent of the right angle than Le Corbusier. Heres a great group of tributes from some of the more notable names influenced by Niemeyer on the Guardian.

Niemeyer opened up a new world of design for contemporary designers. His buildings were pieces of art themselves, and although some complain they are less functional because of that, they always echoed the function of the building itself. He was not without faults. Brasilia failed in many ways, and is cited as a disaster as far as urban planning goes (but what past urban plan ever did work out?) For all his works, he always put the utmost care into creating something truly beautiful to experience. And this duality may be the mark of his career. His work was a fusion of modernism and its exact opposite. He reconciled modernist ideals and beauty, and didn’t need excess or adornment to make his buildings shine. For that we tip our hat to the master, a true artist who worked until the end, as if he tried to squeeze every last drop of creativity out of himself before he could create no more. Lucky for us the fruits of his creativity live on, and hopefully will for a very long time.

Life in Pictures, The Guardian

I'm a freelance journalist based out of New York City. I specialize in the arts, architecture, design, and music. I spend most of my time writing and the rest reconciling laptops, Casio keyboards, and old tape machines to make music. I can be reached via Twitter.

Interconnection and Crossroads: Labor Pains of a New WorldviewNASA UFO Photos: What Do They Really know?